Posted on May 24, 2017 by laststandonzombieisland 2 comments 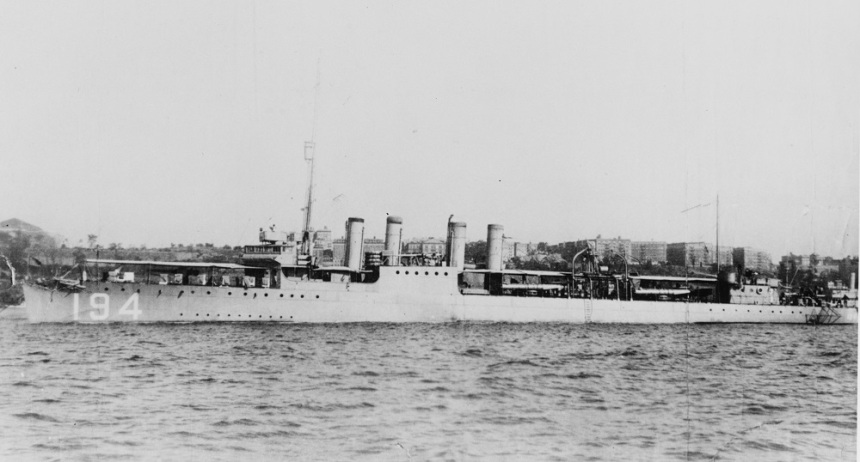 Here we see the Clemson-class “four-piper” flush-decker destroyer USS Hunt (DD-194) at anchor in New York Harbor when new, circa 1920. One of a tremendous class of vessels some 156-strong, she had a long and varied career.

An expansion of the Wickes-class destroyers with a third more fuel capacity to enable them to escort a convoy across the Atlantic without refueling, the Clemsons were needed to combat the pressing German submarine threat of the Great War. At 1,200-tons and with a top speed of 35 knots, they were brisk. Another thing they were was built too late for the war.

The hero of our story, USS Hunt, was laid down at Newport News 10 weeks before Armistice Day, named in honor of William Henry Hunt, Secretary of the Navy under President Garfield. Peace delayed her completion until 30 September 1920 when the above image was taken.

After shakedown, Hunt participated in training and readiness exercises with the Atlantic Fleet and conducted torpedo trials on the range out of Newport, R.I. before moving to Charleston.

With the looming idea of naval limitations treaties, the USN rapidly scrapped 40 of their new Clemsons (those built with British style Yarrow boilers) and put whole squadrons of these low mileage vessels in ordinary. One, USS Moody (DD-277) was even sold to MGM for making the film “Hell Below” where she was used as a German destroyer and blown up during filming!

Our Hunt decommissioned at Philadelphia Navy Yard 11 August 1922, with only 23 months of gentle Naval service under her belt.

While the Hunt was sitting in Philly, a funny thing happened. The country got sober. Well, kind of.

As deftly retold in a paper by the USCG Historians Office, the service, then part of the Treasury Department, was hard-pressed to chase down fast bootlegging boats shagging out to “Rum Row” where British and Canadian merchants rested in safe water on the 3-mile limit loaded with cases of good whiskey and rum for sale.

Rum Runners in Canada and in the Bahamas had the cry, “For some, there’s a fortune but others will die, come on load up the ship boys, the Yankees are dry.”

This led the agency to borrow 31 relatively new destroyers from the Navy, an act that would have been akin to the USN transferring most of the FFG7 frigates to the Coast Guard during the “cocaine cowboy” days of the 1980s.

USCGD Ammen (CG-8) in pursuit of a rumrunner

US Coast Guard Paulding-class destroyer McCall (CG-14/DD-28) arriving at Charlestown Navy Yard Boston Public Library Leslie Jones Jan. 15, 1928. Commissioned 23 January 1911, she served as a convoy escort in WWI and was transferred to the United States Coast Guard on 7 June 1924, then returned in 1930 and scrapped to comply with the Washington Naval Treaty

From the USCG Historian:

In the end, the rehabilitation of the vessels became a saga in itself because of the exceedingly poor condition of many of these war-weary ships. In many instances, it took nearly a year to bring the vessels up to seaworthiness. Additionally, these were by far the largest and most sophisticated vessels ever operated by the service and trained personnel were nearly nonexistent. As a result, Congress authorized hundreds of new enlistees. It was these inexperienced men that made up the destroyer crews and contributed to the service’s greatest growth prior to World War II.

A total of 31 destroyers served with the Coast Guard’s Destroyer Force. These included three different classes, the 742-ton “flivver-class,” “1,000-ton class”, and the 1,190-ton “Clemson-class” flush-deckers. Capable of over 25 knots, the destroyers had an advantage in chasing large rumrunners. They were, however, easily outmaneuvered by smaller vessels. The destroyers’ mission, therefore, was to picket the larger supply ships (“mother ships”) and prevent them from off-loading their cargo onto smaller, speedier contact boats that ran the liquor into shore.

Hunt was one of the last tin cans loaned to the service.

She only served three years with the Coasties, transferring 5 Feb 1931 and placed in commission at Philadelphia Navy Yard, then deploying to Stapleton, NY where she became the flag for the Special Patrol Force there.

While chasing down rum boats along the New York coastline, she apparently had a very serious mascot: 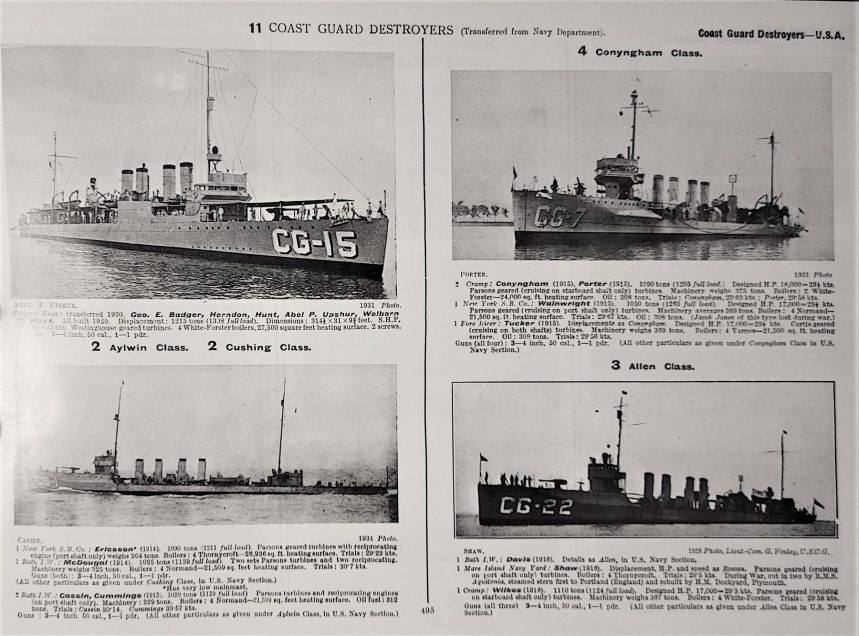 On 6 Jan 1933, she was transferred to Division II, Coast Guard Destroyer Force, and, along with other Treasury Department-loaned tin cans, supported the Navy on the Cuban Expedition based out of Key West for several months as the country watched how the troubles down there were going on.

Hunt arrived back at Stapleton 9 November 1933 and, with the Volstead Act repealed, was decommissioned from USCG service 28 May 1934 and returned to the Navy, who promptly sent her back to red lead row.

There she sat once more until the country needed her.

On 26 January 1940, she once again was taken out of mothballs and brought to life by a fresh crew as the Navy needed ships for the new neutrality patrol in the initial stages of WWII. Shipping for the Caribbean, she escorted the USS Searaven (SS-196), a Sargo-class submarine, from the Canal Zone to Florida then performed training tasks in the Chesapeake.

Once again, her service with the Navy was brief.

Hunt got underway from Newport 3 October 1940 and reached Halifax, Nova Scotia two days later, where she took on 103 British sailors and, three days after that, she decommissioned from the U.S. Navy, was struck from the Naval List, and taken up by the Royal Navy as the Town-class destroyer HMS Broadway (H80) as part of the infamous “Destroyers for Bases Agreement” between the two countries.

(For the six-page original 1940 press release, see this page at the Franklin D. Roosevelt Presidential Library and Museum Collections)

As noted by Lt Cdr Geoffrey B Mason’s service histories, “Broadway” had not previously been used for any RN ship but did represent both a city in the UK and one in the U.S.

Changes to her by the Brits included removal of mainmast and shortening of the foremast, trimming the after funnels, and replacing the 3in and 4in guns mounted aft with a 12pdr British HA gun in X position. The aft torpedo tubes were also jettisoned and the U.S style depth charges were replaced with British ones.

She also picked up an “Evil Eye” or “Magic Eye” on her bow, painted by her crew to ward off bad spirits. 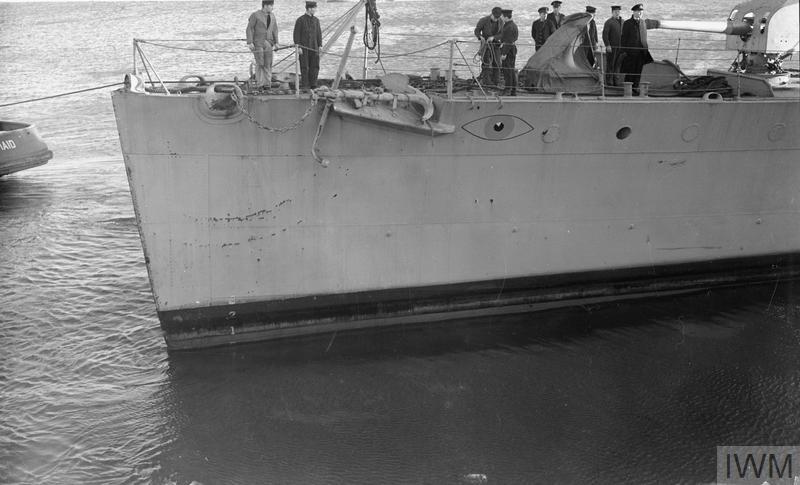 The huge ‘Magic Eye’ on the bows of the BROADWAY as she leaves on another trip. Copyright: © IWM. Original Source: http://www.iwm.org.uk/collections/item/object/205152830

During this time, she directly helped shorten the war on 9 May 1941 when assisting the destroyer HMS Bulldog and corvette HMS Aubretia, she captured German submarine U-110 between Iceland and Greenland. The Type IXB U-boat provided several secret cipher documents to the British as part of Operation Primrose and was one of the biggest intel coups of the war, helping to break the German Enigma codes.

She also helped chalk up a second German torpedo slinger when on 12 May 1943 she joined frigate HMS Lagan and aircraft from escort carrier HMS Biter in destroying U-89 off the Azores. 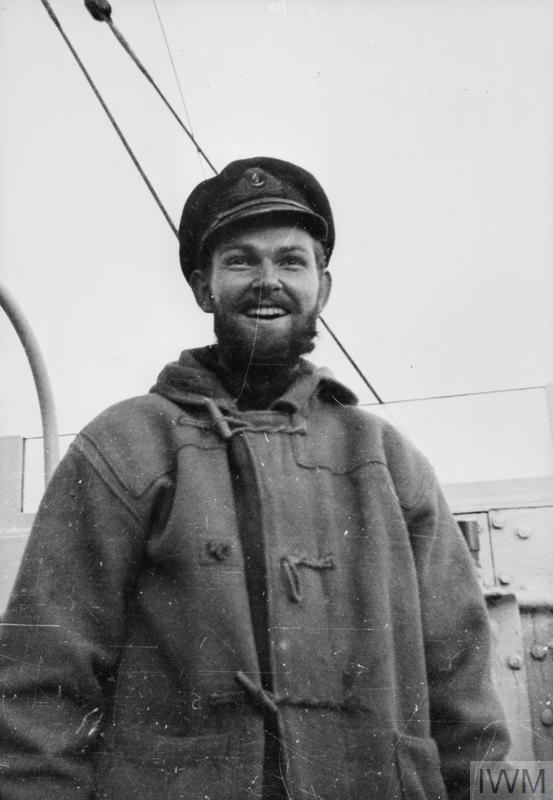 SUB LIEUT ROY A GENTLES, RCNVR, OFFICER ON LOAN TO THE ROYAL NAVY, WHO WAS the FIRST LIEUTENANT ON BOARD HMS BROADWAY IN THE SUCCESSFUL ANTI-U-BOAT ACTION IN THE NORTH ATLANTIC.  (A 17288) Copyright: © IWM. Original Source: http://www.iwm.org.uk/collections/item/object/205150178

Hunt/Broadway, showing her age, was relegated to training duties by 1944 in Scotland, where she was a target ship for non-destructive bombing and practice strafing runs by new pilots. For this much of her armament to include her radar, anti-submarine mortar, torpedo tubes, and HF D/F outfit was removed.

She did get one last hurrah in at the end of the war, sailing for Norwegian waters where she performed occupation duties that included taking charge of several surrendered German U-boats in Narvik and Tromso as part of Operation Deadlight.

Hunt/Broadway, who served more in the Royal Navy than she ever did in the naval service of her homeland, was paid off 9 August 1945 and placed in an unmaintained reserve status. She was eventually sold to BISCO on 18th February 1947 for demolition by Metal Industries and towed to the breaker’s yard in Charlestown near Rosyth in 1948.

As for her sisters, seven Clemson‘s were lost at the disaster at Honda Point in 1923, 18 (including six used by the British) were lost in WWII including one, USS Stewart (DD-224), which was famously raised by the Japanese and used in their Navy.

From what I can tell the last one in U.S. Navy service was USS Semmes (DD-189/AG-24), like Hunt a former Coast Guard destroyer, stricken in November 1946 after spending the war testing experimental equipment at the Sonar School in New London.

The last of the 156 Clemsons still afloat, USS Welborn C. Wood (DD-195), also a former Coast Guard destroyer, became HMS Chesterfield on 9 September 1940. She was allocated for scrapping on 3 December 1948. None of the class were retained and few relics of them exist today.

However, the codebooks and Enigma machine that Hunt/Broadway helped capture from U-110 are on display at Bletchley Park.

And the event is recorded in maritime art.