Posted on November 25, 2020 by laststandonzombieisland 2 comments 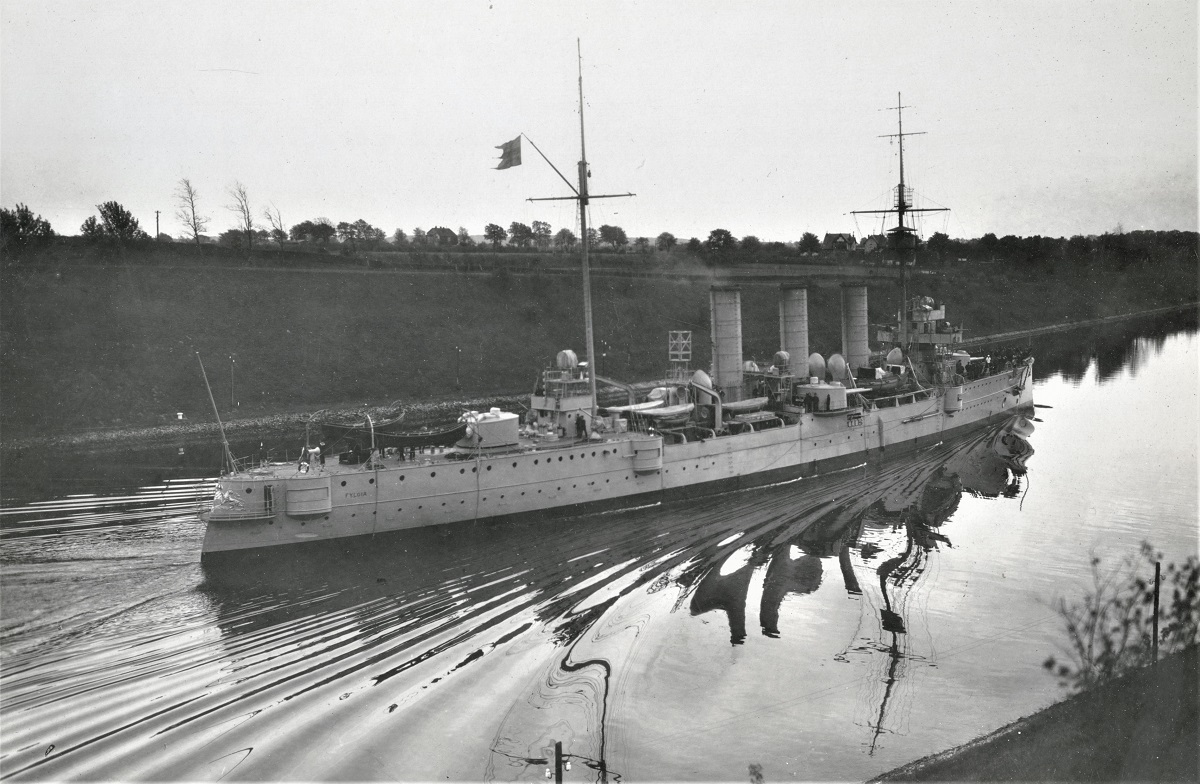 Here we see the pansarkryssare, or armored cruiser, HSwMS Fylgia of the Swedish Royal Navy passing through the Weimar Republic’s Kiel Canal in the summer of 1928 during the vessel’s annual goodwill cruises. A beautiful ship that remained a stalwart sentinel in the fleet of the three crowns, Fylgia endured across a career that spanned 50 years– and her guns lasted even longer.

Laid down at Bergsunds Mekaniska Verkstads AB (Finnboda) in October 1902, Fylgia was named for the mythological Norse guardian angel figures, which represented her intended role in the Swedish battlefleet– that of being the leader of the country’s growing flotillas of torpedo boats, vessels that would be the mainstay of the Baltic nation’s coastal defense throughout the 20th Century.

The 4,800-ton, 379-foot cruiser was speedy-ish on her engineering suite of 12 Yarrow-style coal-fired boilers and two triple expansion engines, ginning up 22.8-knots on her trials. In a nod to her auxiliary role as the school ship for the Swedish Navy’s officer corps, her 322-man complement could be expanded by as many as 50 midshipmen. Notably, when launched, she was the fleet’s longest modern warship, running some 65-feet longer than the coastal defense battleship (Pansarskepp) Oscar II.

Relatively protected, her Krupp armor ranged up to 5-inches deep that protected her boiler and engine rooms, making her one of the smallest armored cruisers in the world.

Her armament included eight Bofors 15.2 cm/50 (6″) Model 1903 guns in four twin enclosed armored turrets– rare in an age of cruisers with simple shielded guns– including two on the centerline edges and one each fore and aft. She had 14 smaller anti-torpedo boat guns, mostly in casemates, and a pair of submerged 18-inch torpedo tubes to lend her own “Swedish fish” (see what I did there?) to a torpedo attack against those who would enter the country’s waters. Like most cruisers of her day, she also had the ability to carry and deploy mines.

Once completed in June 1907, she was off immediately on what was to be her calling card– långresor goodwill cruises that waved Sweden’s flag while training her mids. She made 32 such cruises over the coming decades.

With Prince Wilhelm of Sweden aboard, Fylgia visited Norfolk for the Jamestown Exposition in 1907, and her crew was the subsequent talk of the town in New York where the original knickerbocker Teddy Roosevelt hosted a July 4th reception in honor of the midshipmen. They also squeezed in visits in Boston, France, Bermuda, and England before arriving back at Karlskrona in September. 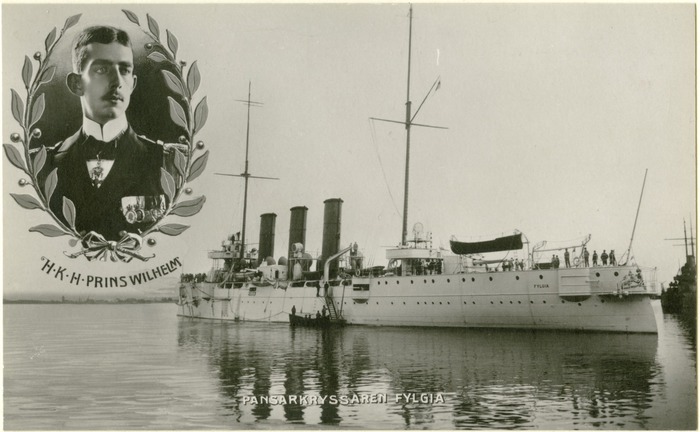 A period postcard showing our cruiser with Prince Wilhelm, Duke of Södermanland. The Norwegian-Swedish noble of the Bernadotte family, born in 1884, was married to the Tsar’s first cousin and was something of an author, penning numerous books in his lifetime. Fo220335

Before the Great War hampered her peacetime trips, she would complete another 10 out-of-Baltic cruises in six years, often taking as many as three deployments a year. 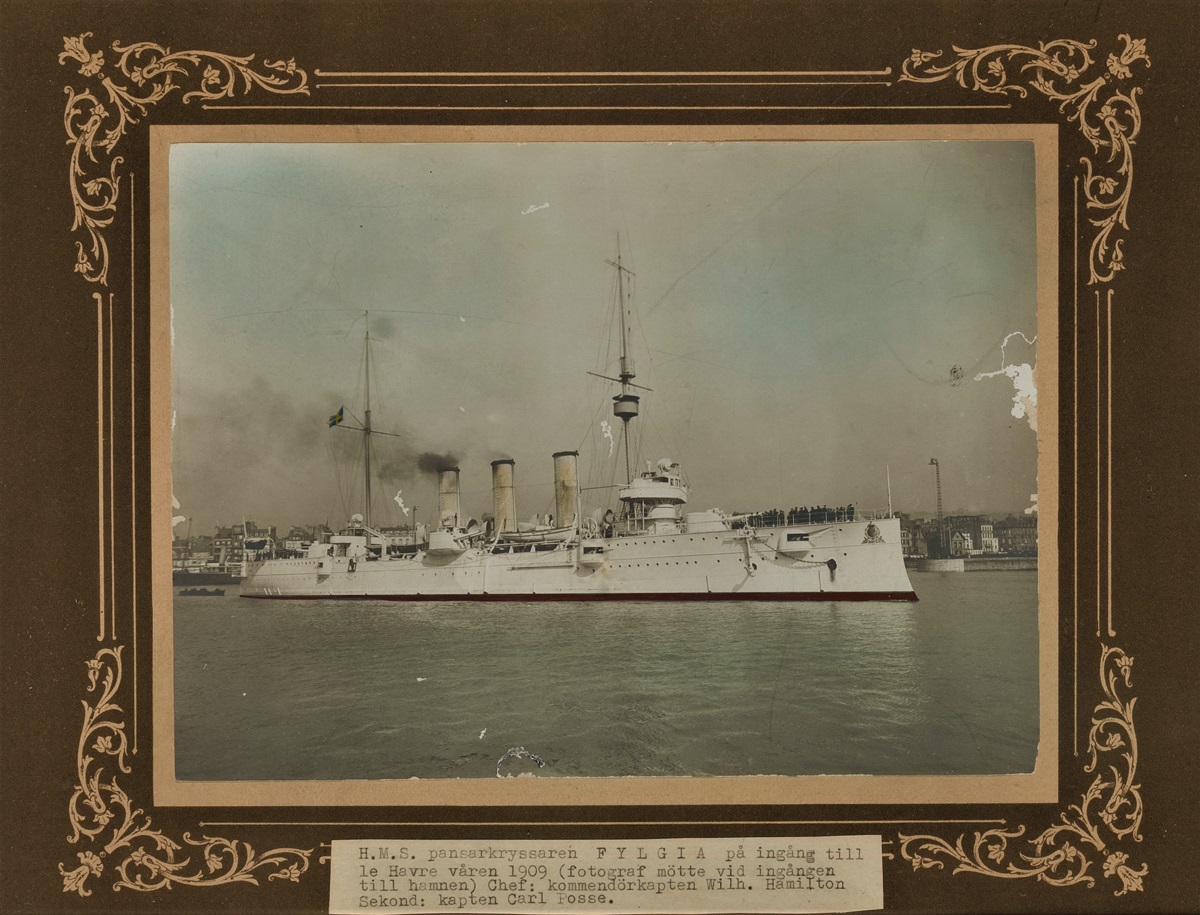 In that time, she called at ports in Belgium, Scotland, Spain, Holland, Italy, Algeria, Portugal, Panama, Trinidad, Cuba, Egypt, and other exotic locales throughout the Caribbean and the Mediterranean.

As the lights went off across Europe, Fylgia had just left Karlskrona on the way to Gibraltar and points Med when she received a signal to return home post-haste. Landing her finery, she made ready for armed neutrality (Neutralitesvakten) and held the line for the next four years, challenging and keeping an eye on foreign ships in Swedish water for the next four years.

By 1919, with peace once again returned to (most of) Europe, she left Sweden for a winter cruise to the U.S., calling at New York, Hampton Roads, and Savannah before roaming as far south as Cuba and Panama then returning home in time for Easter 1920.

Then came a series of increasingly longer cruises, heading to India and Sri Lanka via the Suez in 1921 and an epic Latin American excursion in the winter of 1922-23.

During that South American trip, she left Sweden on 6 November, touching at Kiel and Spain before crossing the line on the way to Brazil.

Archive photos show what looks to be a downright spooky Neptunus Rex ceremony on that occasion. 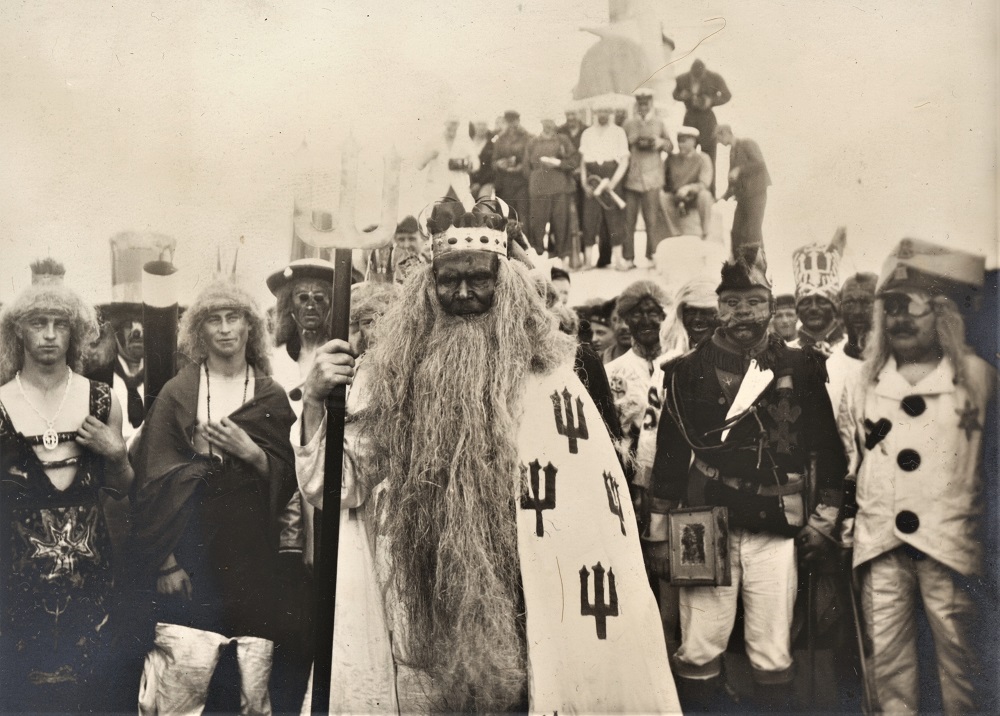 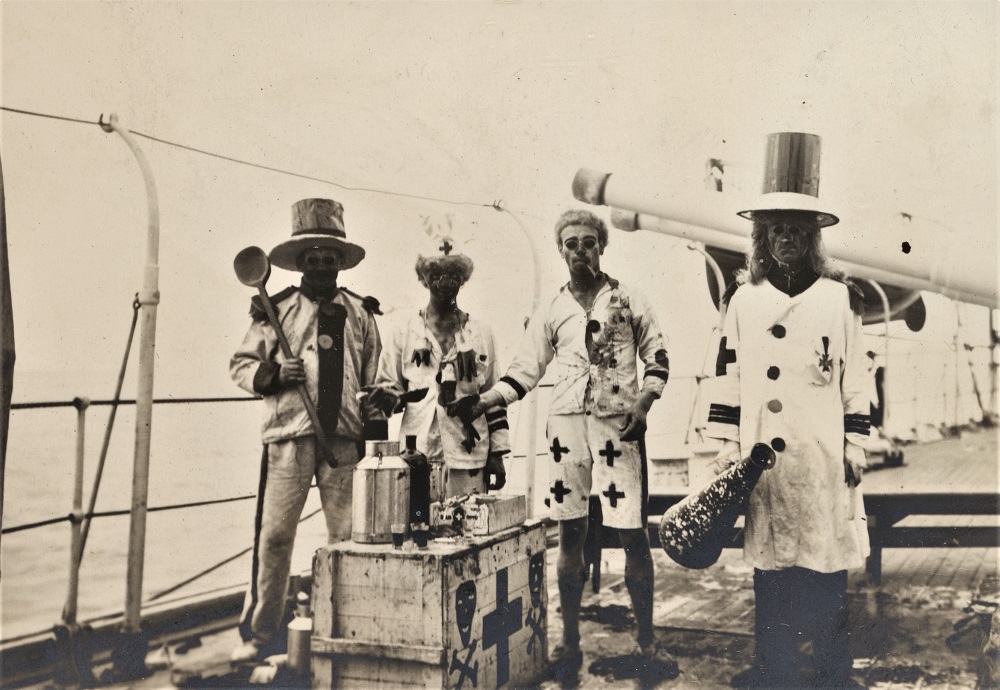 Calling at Uruguay, Argentina, then rounding the Horn into the Pacific, she continued up the West coast of the continent to the Ditch, then crossed back into the Caribbean and heading for England, arriving back at Karlskrona in April in what was to be her longest mission– making 21 port calls. 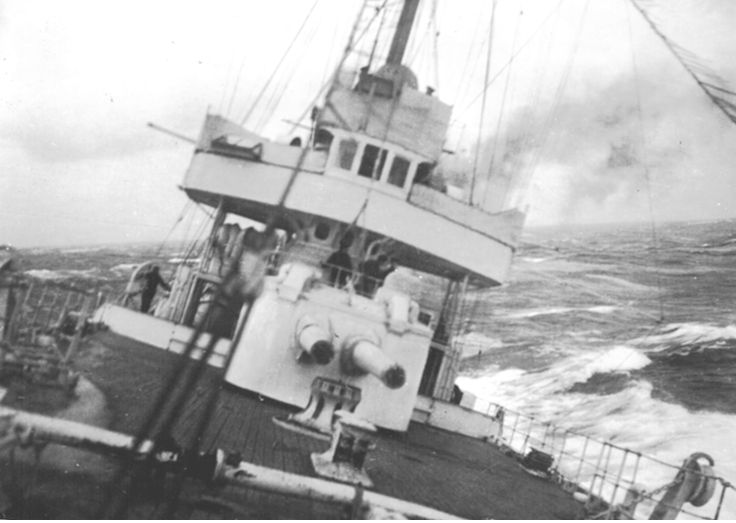 Rocking and rolling! This isn’t the Baltic anymore. 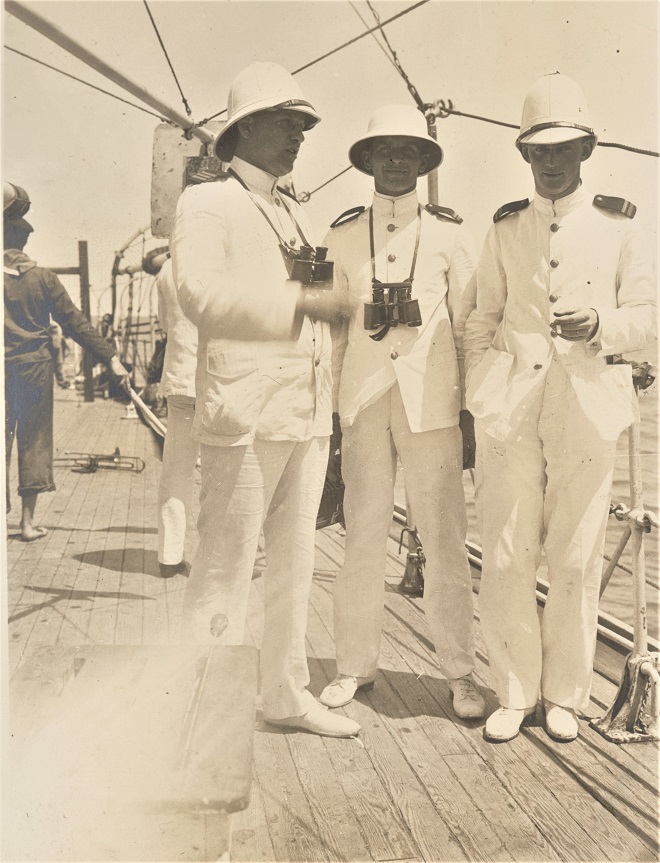 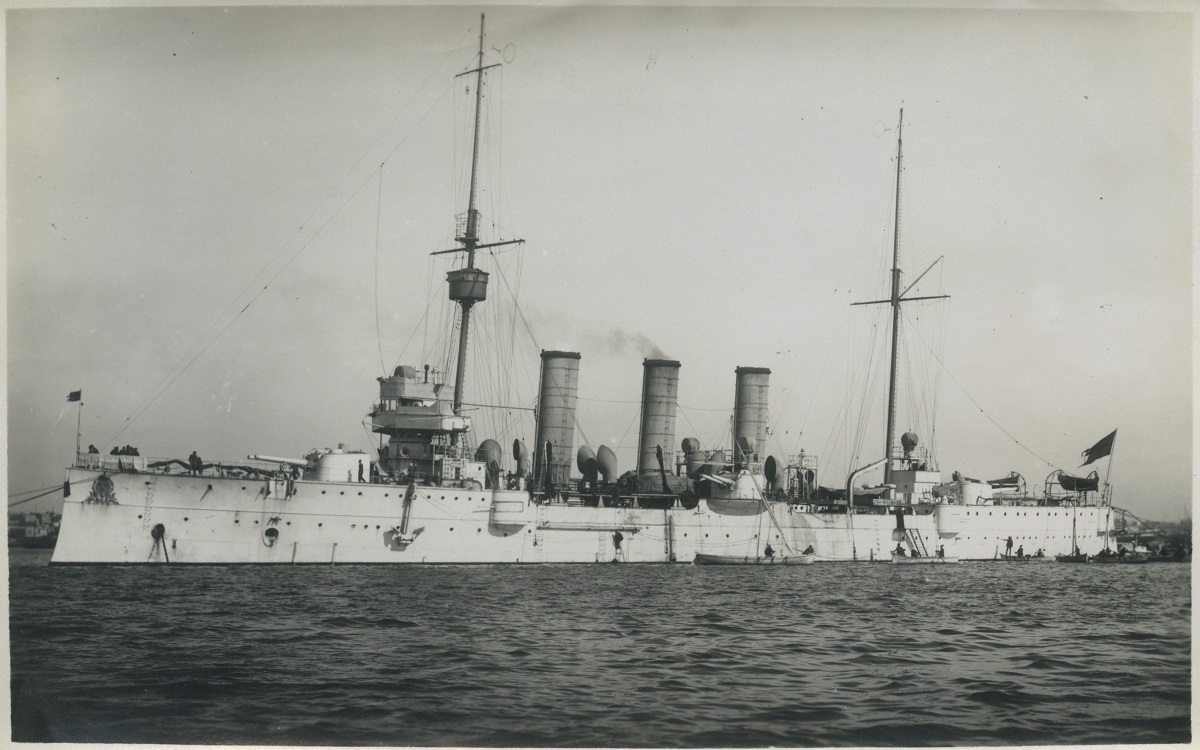 “Swedish armored cruiser Fylgia docks at the Philadelphia Navy Yard. Warping the Fylgia to her berth, the cruiser, with a crew of 390 men and twenty-two cadets in training remains here until Saturday, when she leaves for Mobile, Alabama. After visiting the Azores, she will return to Sweden” 1/30/1930. Temple University Collection

By July 1933, she would complete another 16, mostly shorter, overseas sorties. On her 1927 trip, while visiting Latin America once again, she collided with the Brazilian freighter SS Itapura, sending the merchantman to the bottom. Nonetheless, Fylgia’s crew sprang into action, rescuing all of Itapura’s mariners.

Then her mission changed.

Rebuilt for a new era

By 1939, with Europe again headed to war, it was thought that Fylgia could be reworked for a coastal defense mission, after all, she still had a sound hull and a decent armor scheme.

The armored cruiser FYLGIA under reconstruction at Oskarhamn’s shipyard 1939-1940. Note, all of her funnels are gone. Fo62553A

Transferred to Oskarshamn, Fylgia spent 18 months undergoing a complete modernization. With that, her 12-pack of coal-burning boilers were junked in favor of a quartet of new Penhoët oil-burners, which made one of her three boiler rooms an empty compartment–converted to accommodations– and allowed her No. 1 funnel to be deleted. She could again make 21+ knots. 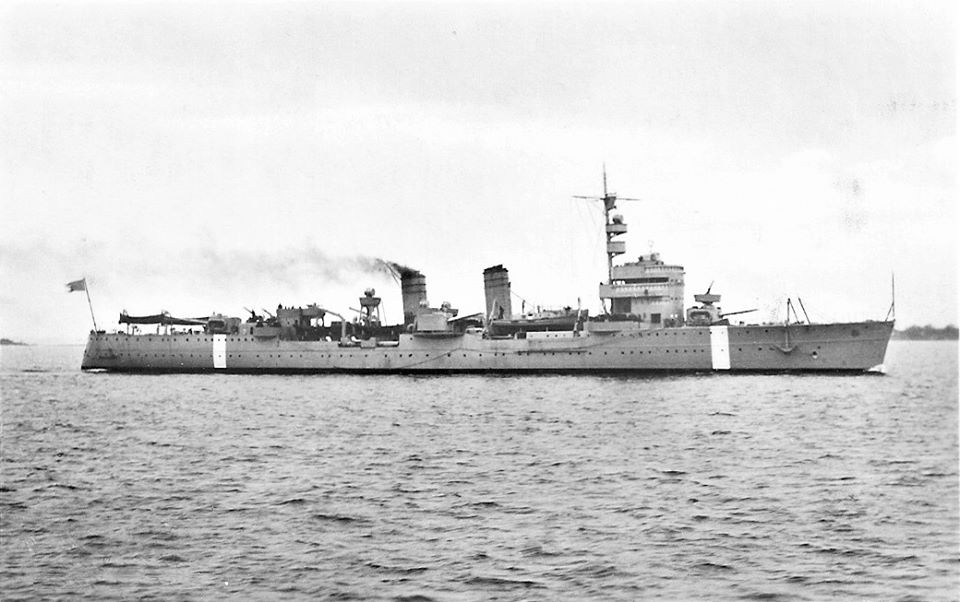 And another shown just with stripes, likely late in the war or just after

Topside, her entire arrangement changed with a new superstructure and a redesigned bow. To give her teeth, she picked up eight new 1930-pattern 15.2 cm/55 (6″) Bofors, and a mixed suite of 57mm, 40mm, 25mm, and 20mm AAA guns as well as two larger 21-inch deck-mounted torpedo tubes. For sub-busting, she picked up depth charges and listening gear.

The result was a new, albeit slow for the era, 34-year-old light cruiser.

Joining the Gothenburg Squadron in October 1941, Fylgia spent her summers on neutrality patrol then embarked midshipmen in the winter for schoolship missions in home waters, a familiar task.

An excellent wartime image of her at Malmo, on 4 May 1944, showing her aerials and armament. Note the three crowns badge on her hull.

Into the Cold War

Once WWII concluded, the rejuvenated Fylgia resumed her old work as a seagoing training ship, sailing on a series of four short tours around Western European ports and a lengthy cruise to West Africa over the winter of 1947-48, calling at Dakar and Freetown. 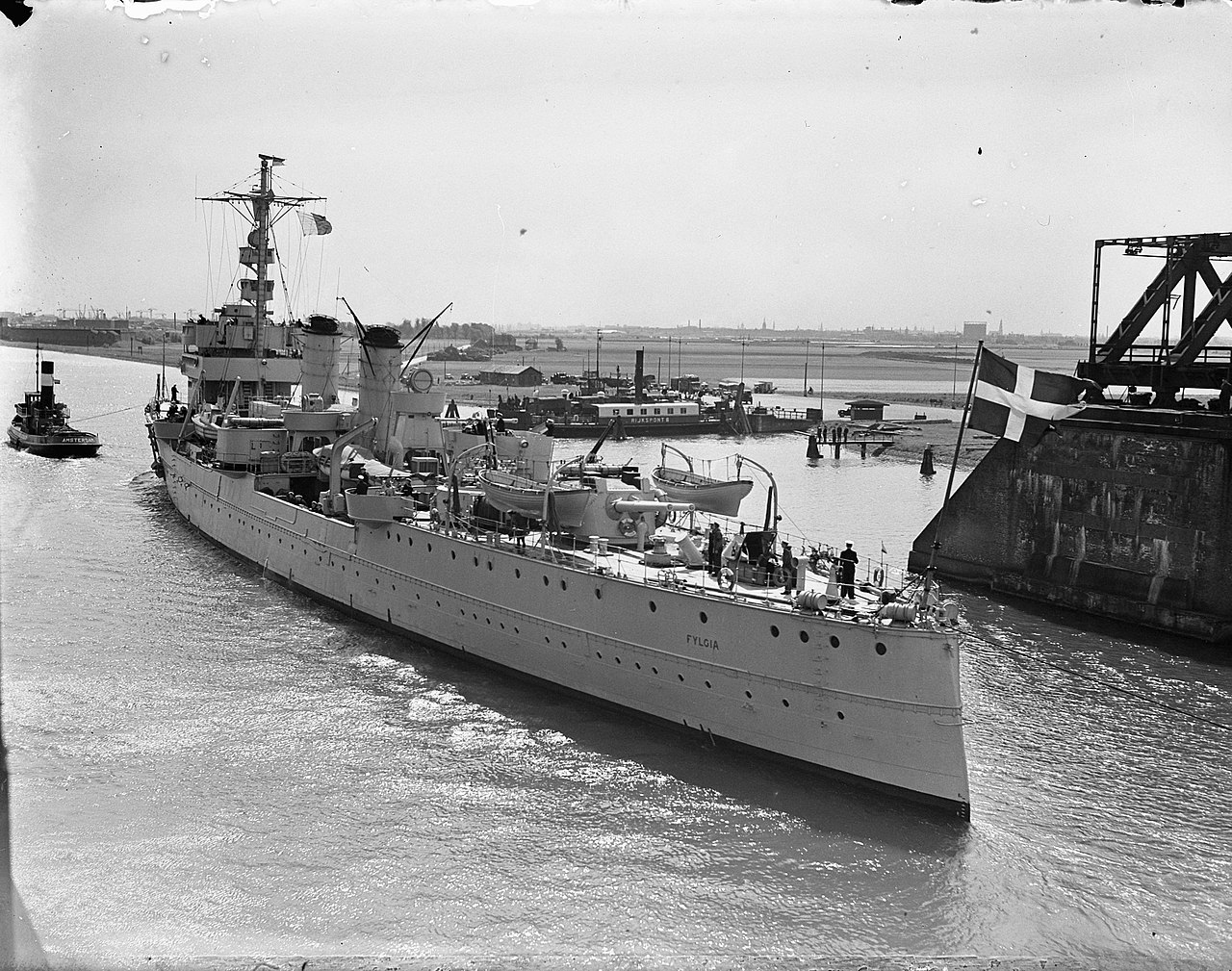 Fylgia passing the Hembrug bridge across the North Sea Canal headed to Amsterdam, 28 May 1948, Dutch Nationaal Archief 902-7703. Note some of her wartime AAA guns have been stripped but her long-barreled 6-inchers remain aboard.

It was during that cruise that the Swedish Olle Lindholm musical comedy, Flottans Kavaljerer, was filmed aboard and it has remained a classic.

However, the turn-of-the-century vessel was showing her age and remained in Swedish waters after 1949. By 1953, she was again decommissioned and disarmed, turned into a floating target ship, an inglorious but still useful tasking. 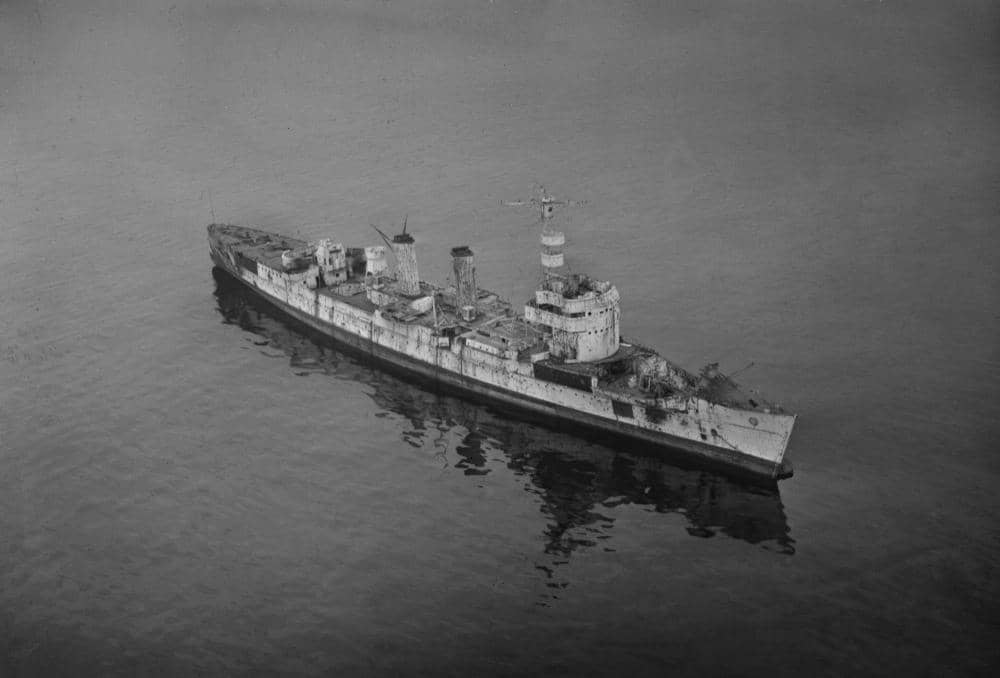 In 1957, Fylgia was sold for her value in scrap and dismantled in Copenhagen.

Nonetheless, Fylgia’s still-young Bofors 6″/55s would live on much longer. Emplaced in the Siknäs battery as part of the Swedish Kalix line (Kalixlinjen), all eight were positioned in four new purpose-built emplacements to cover the deepwater port of Töre and the approaches to towards Boden along Highway 13 (E 4).

Note the camo screening is scarce, but the framework remains. Via SiknasFortet Museet

The battery was served by a local defense battalion of over 300 men and was, when it was finished in 1960, considered the largest and most modern of the Kalix line’s approximately 3,000 installations.

And a better look at how it would look netted up. Via SiknasFortet Museet

Each battery system was constructed of concrete with four floors based on springs to mitigate shockwaves and was extensively camouflaged. They included self-contained generators, magazine facilities, barracks with showers, and kitchens and were fully protected against nuclear, biological, and chemical weapons. Outside of the emplacements, they were protected by a ring of 40mm AAA guns and counter-assault pillboxes manned by infantry. 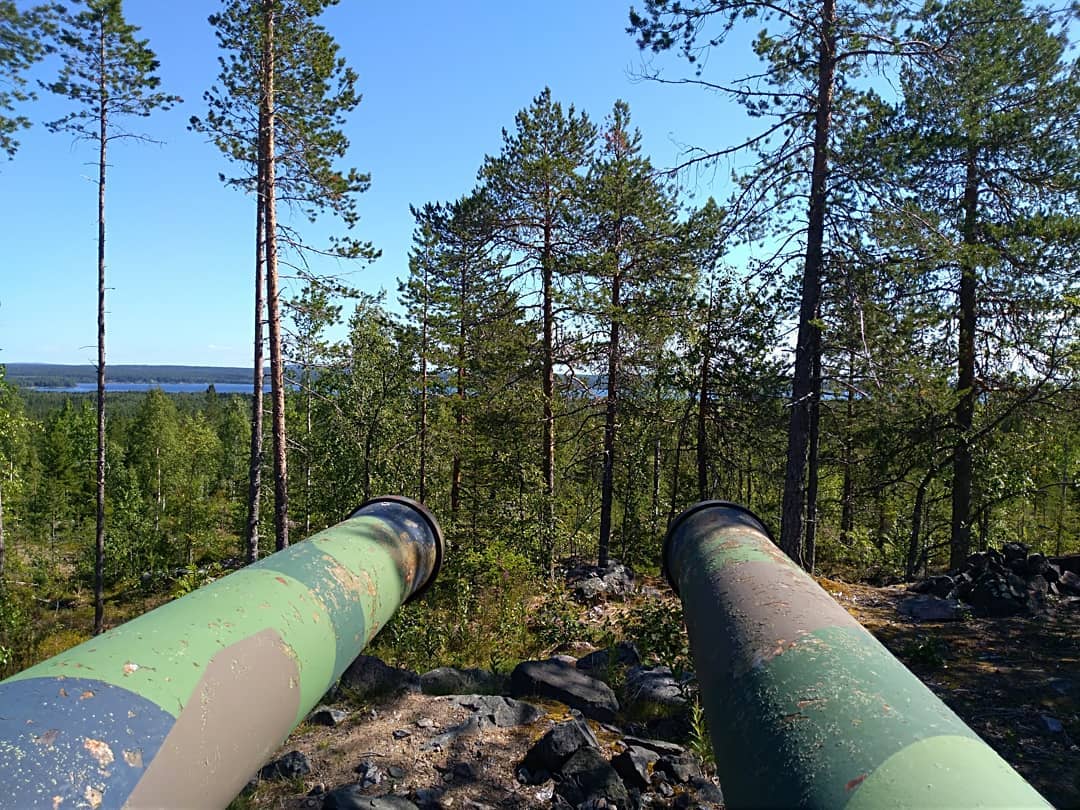 The trees have grown up in the past 20 years, but you get a general idea. Via SiknasFortet Museet

Despite being 1930s technology, these could still ruin a perfectly good Russian destroyer moving about the Swedish littoral well into the 1990s. Via SiknasFortet Museet

The Siknäs battery, operated by the Swedish Army until as late as 1998, is preserved as a museum today.

Other parts of the old cruiser survive, such as her elegant porcelain tea set, which has been broken out on at least five continents.

And of course, there is a ton of maritime art in circulation, particularly in postcard format. 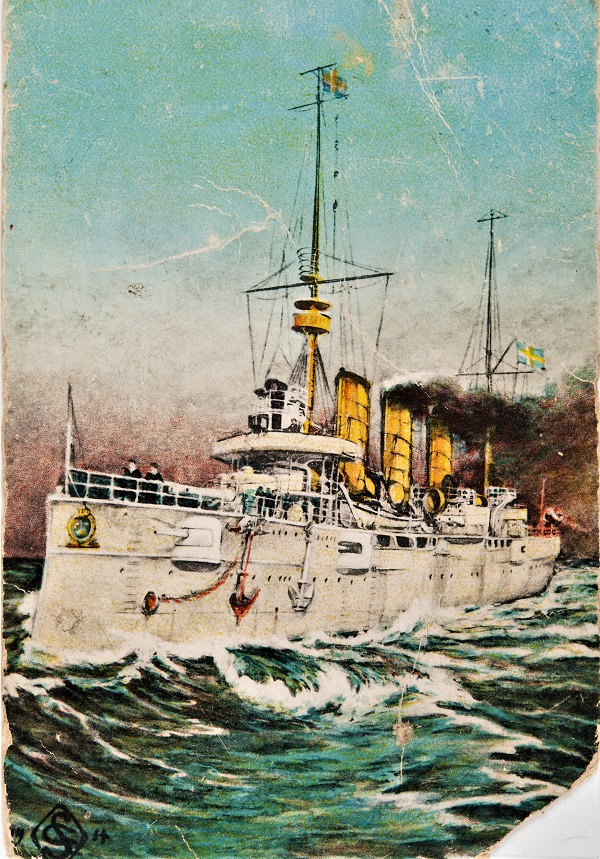