Alabama-based Kimber is donating 9mm pistols and .308 Winchester-caliber rifles to the Ukrainian Ministry of Defense.

The company announced on Wednesday it is inspired by the courage of the Ukrainian people in their struggle against an ongoing military invasion from neighboring Russia and is ready to help.

“The people of Ukraine are enduring tremendous hardships and are in need of support from around the world,” said Leslie Edelman, Kimber owner and CEO.

In terms of support, Edelman says Kimber is sending 200 R7 Mako 9mm subcompact pistols (my current EDC for the past several months), 10 Advanced Tactical rifles in .308 Win., and 10 bolt-action rifles in .308 Win. Each rifle will include two magazines and a replacement firing pin assembly while the Makos will ship with 800 extra 13-round magazines.

While shipping such pistols to a modern European combat zone seems curious at first, handguns are in common use as sidearms for officers, specialists, pilots, and heavy weapons operators. 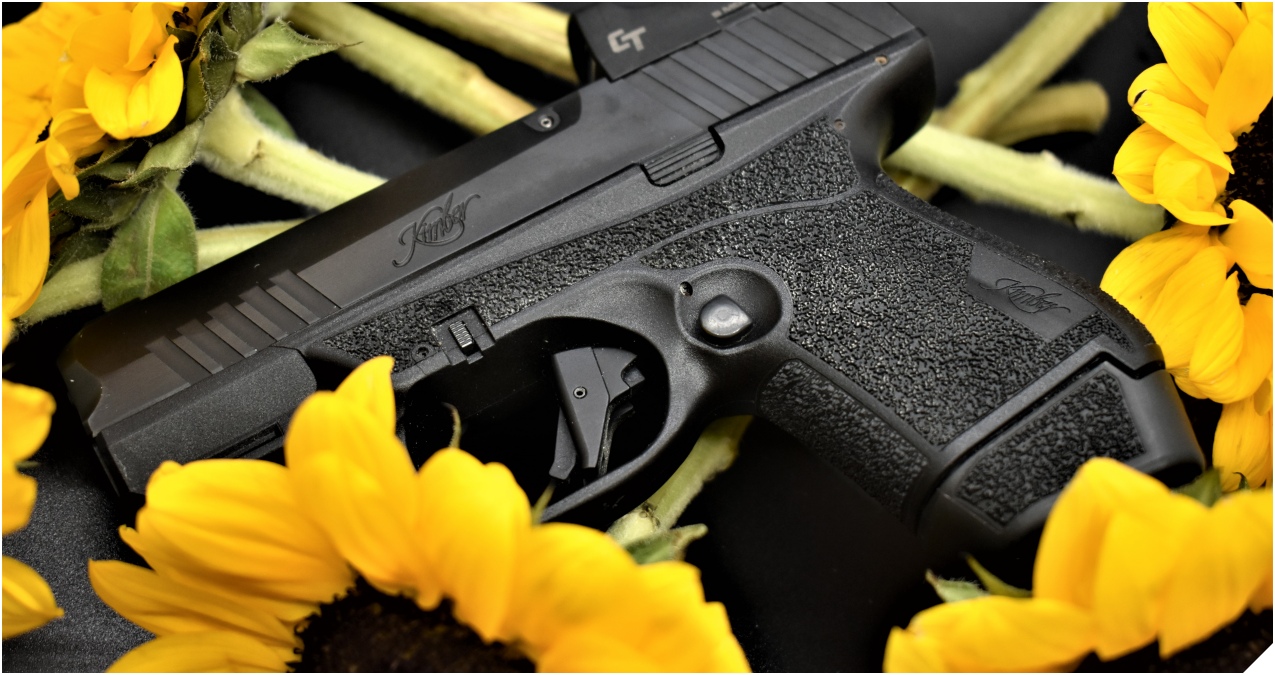 Of note, the Mako is roughly comparable in size to the PM Makarov, long a standard pistol in Eastern European service, while offering a higher magazine capacity and a more effective cartridge.

Posted on March 21, 2022 by laststandonzombieisland 2 comments

Florida-based firearms maker KelTec made the most of a sudden surplus of 9mm carbines and donated them to Ukraine.

Adrian Kellgren, director of industrial production at KelTec– and son of the company’s legendary founder, George Kellgren– told local media the company was recently left with a $200,000 order for SUB2000 carbines. The original order, to a longtime vendor in the Black Sea Ukrainian port city of Odesa, was unpaid for, and the vendor was unable to be contacted.

The 400 9mm carbines had been ordered last year, but by the time the red tape cleared the client was unable to accept them and Ukraine is now fighting off a Russian invasion– with enemy troops closing in on Odesa. The solution hit on by Kellgren was to donate the guns to the Ukrainian government to aid in the resistance to the invasion.

Introduced in 2001, the KelTec SUB2000 9mm pistol-caliber carbine is now in its second generation. Lightweight at just 4-pounds while still retaining a 16.1-inch barrel, it folds in half for easy storage and transport, able to be carried in a pack. 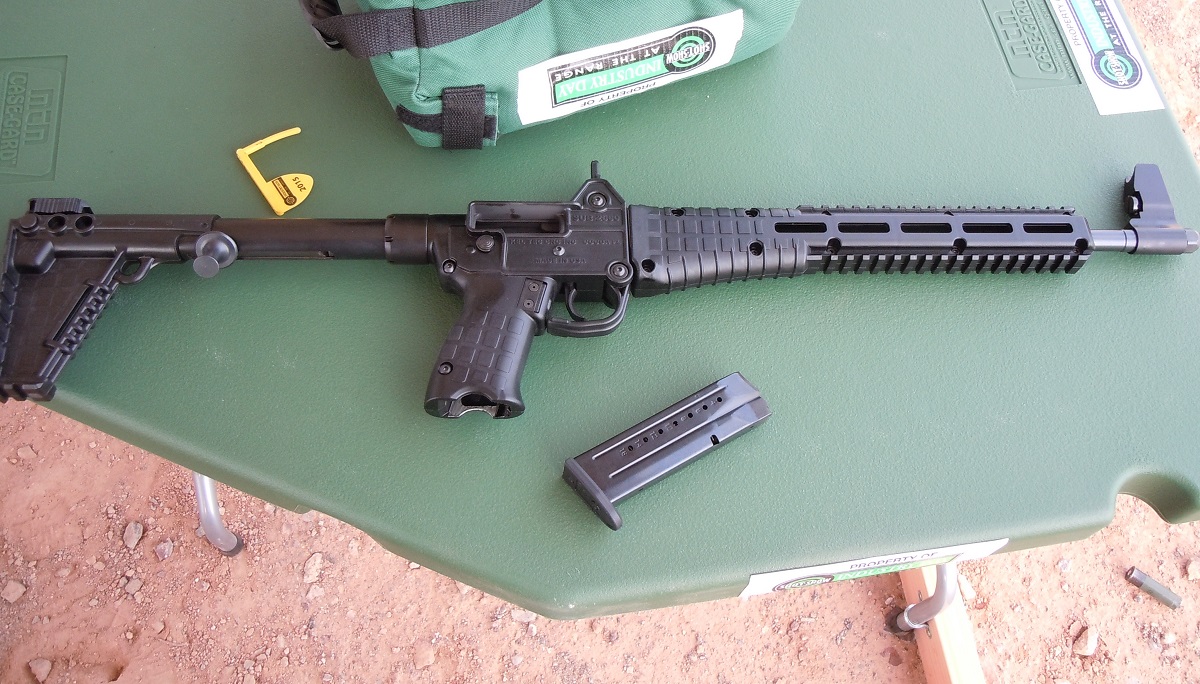 The SUB2000, while not a frontline weapon by any means, can for example fill a role with static defense/home guard-style units posted at local infrastructure to keep an eye out for sabotage, or in guarding POWs, of which there seems to be an increasing amount.

I bet Hugo Schmeisser is rolling and spinning

There, under the Krinkov, is a German StG44 in exploded view, which would probably be OK on any monument except that of Mikhail Kalashnikov

As I covered over at Guns.com, the Russians spent 35 million rubles (about $580K US) on a sprawling monument to the late firearms engineer Mikhail Kalashnikov that was unveiled in Moscow last week. Besides a nearly 30-foot high statue of Kalashnikov, the base of a monument to St. Mikhail, the Orthodox patron of gunsmiths and warriors, contains a representation of several of the engineer’s designs including an AK42 sub gun, AK47, AKM and AK74 rifles, as well as RPK and PK machine guns.

However, as noted by some sharp-eyed firearms enthusiasts and reported by Russian-based Kalashnikov magazine, just under a Krinkov AKS-74U is what appears to be the parts diagram for a German StG-44 Sturmgewehr.

Which some (notably outside of the Motherland) have contended that the AK was based on for decades.

This has caused understandable heartburn in Russia, and, as Russian firearms wonks pile on to disagree with the lineage of the AK– noting it is as Russian as a Florida pirated movie salesman, the offending diagram has been torched out. 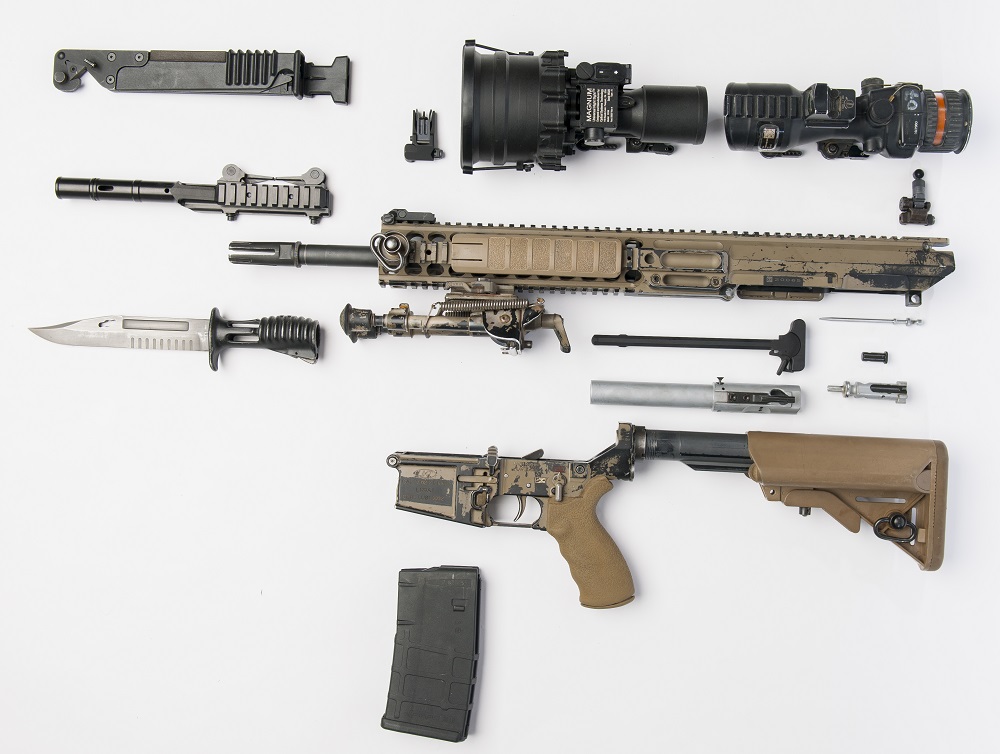 Here we see the British Army’s L129A1 service rifle, sniper, better known on this side of the pond as an LMT LM308MWS. The Brits bought 3,000 of these bad boys in 2014 and are known for a sub-MOA group at 800m with match 7.62x51mm NATO ammo, which is not bad out of a 16-inch barrel. The basic optic is the Trijicon 6×48 ACOG. Also shown are the standard SA80/L-85 Enfield bayonet (note the wirecutter sheath in the top left), and the MilSight S135 Magnum Universal Night Sight (MUNS).

Not pictured is the L17A2 Schmidt & Bender 3-12 × 50 Sniper Scope for long distance work and the SureFire SOCOM762-RC husha can for when you want to spend some quiet moments in the hills looking for ISIS-types. Weight all up (with the ACOG) is 11-pounds, if carrying other sights or the can, this jumps, as does adding a bipod or scrim. She takes regular AR-10 style mags, which you will notice that the Brits use PMAGs (doesn’t everyone). 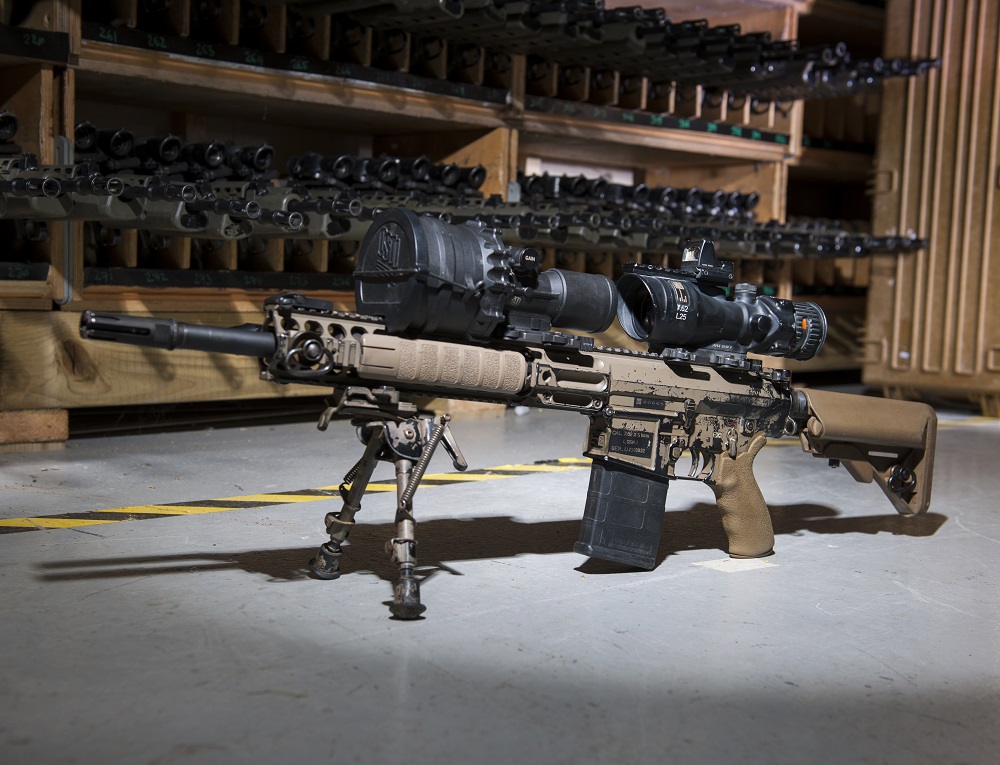 With the U.S. Army looking for a new commercial-off-the-shelf Interim Combat Service Rifle (ICSR) in 7.62x51mm, you better believe guns like the LMT 308MWS are being looked at.

The all-seeing eye (of the networked FFL) 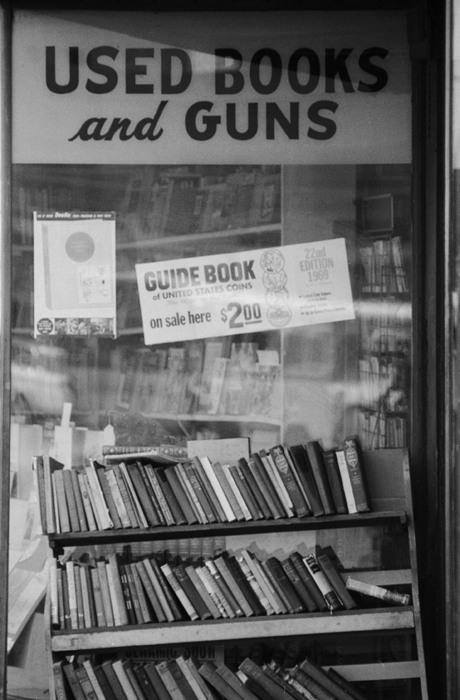 Go ahead, tell me you wouldn’t shop there…

Following the news that the terrorist in the Orlando attack was able to legally purchase his firearms from a local store after he was turned down by one licensed dealer just days before, I spoke a couple weeks ago with software developer and long-time gun owner Seth Banks who came up with an idea that gun shops could help network to keep this from happening in the future.

The idea is simple. A private network for verified Federal Firearms Licensees to share and report incidents they have with suspicious buyers, and communicate with each other. When one shop in the network posts an alert, other dealers within driving distance are alerted via email, in-app notification, and/or text message.

“FFLs deny gun purchases for all sorts of reasons; including mental health, straw sales, intoxication, violent comments in the store, etc. … FFLs are on the front line protecting our community from bad actors already. Why not make their jobs easier?” Banks argued.

And with that Gun Shop Watchlist was formed.

Ireland never really had that much of a firearms industry, but when you mention the AR18 across the pond, you should know that it was (almost) the most iconic rifle of “The Troubles” in Northern Ireland during the last part of the 20th century 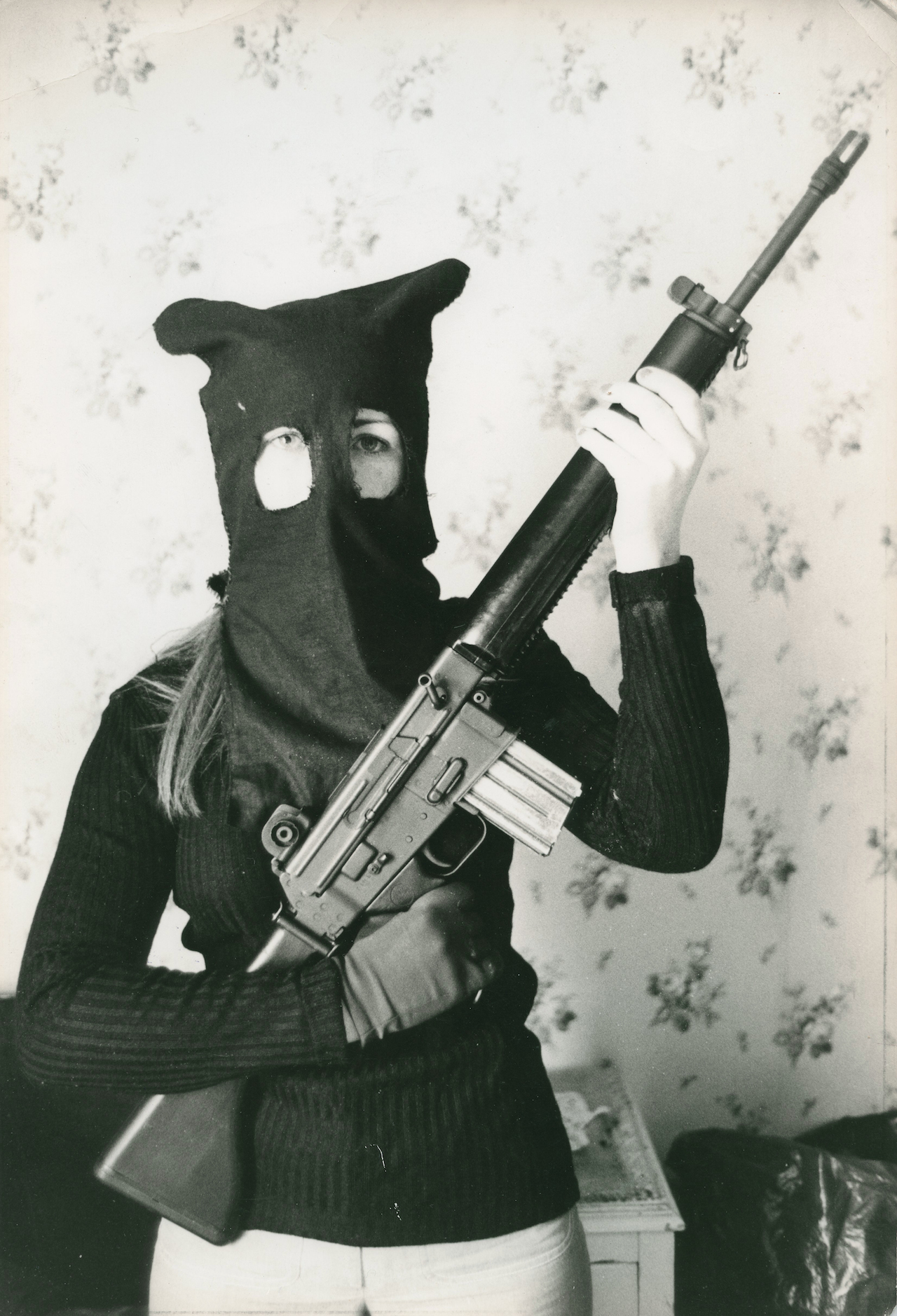 What IS an Assault Weapon?

With all this talk about assault weapons, let’s look at what they are talking about. Just what makes something an ‘assault weapon’ and how does this term compare to the concept of what lawmakers are looking to regulate.

The first true assault rifle was born in 1943 Germany. Invented by firearms engineer Hugo Schmeisser, it was a select-fire (either full auto or semi-auto at the flick of a switch) rifle that fired an intermediate caliber round (larger than a pistol but shorter than a rifle round), and had a large detachable magazine that could be changed quickly. This gun was dubbed the StG44 or ‘storm rifle model 44’ and was a crucial addition to the German arsenal in the end of World War Two.

This rifle was very popular and the Soviets soon had a modified version they adopted a few years later as the AK-47. The current assault rifle of the US military is the M4A1 carbine, which has a select-fire trigger, 14.5-inch barrel, and can fire at 750-rounds per minute until its ammunition is exhausted. For a private citizen to own one of these types of weapons, it has to be made before 1986 as the Hughes Amendment banned production of select-fire weapons for private sales that year. Even if a ‘pre-86’ gun is available, they run upwards of $10K and take 3-6 months to transfer from a Class III dealer after an extensive ATF approval process that includes a $200 tax stamp.

AKS-74U ‘Krinkov’ of the Russian Army. It is 19-inches long with a 8.3-inch barrel and fires 30 rounds of 5.45x39mm at about 700 rounds per minute. Its a true assault rifle…..now lets talk about the mythical creature that is an ‘assault weapon’…..

Read the rest in my column at Firearms Talk.com