Of interest to military history buffs, the 4,400-strong French military parade down les champs Élysée to celebrate the 232nd anniversary of Bastille Day yesterday was led by a 232-member company of the famed “Les marsouins de Leclerc” of the Régiment de Marche du Tchad or RMT. 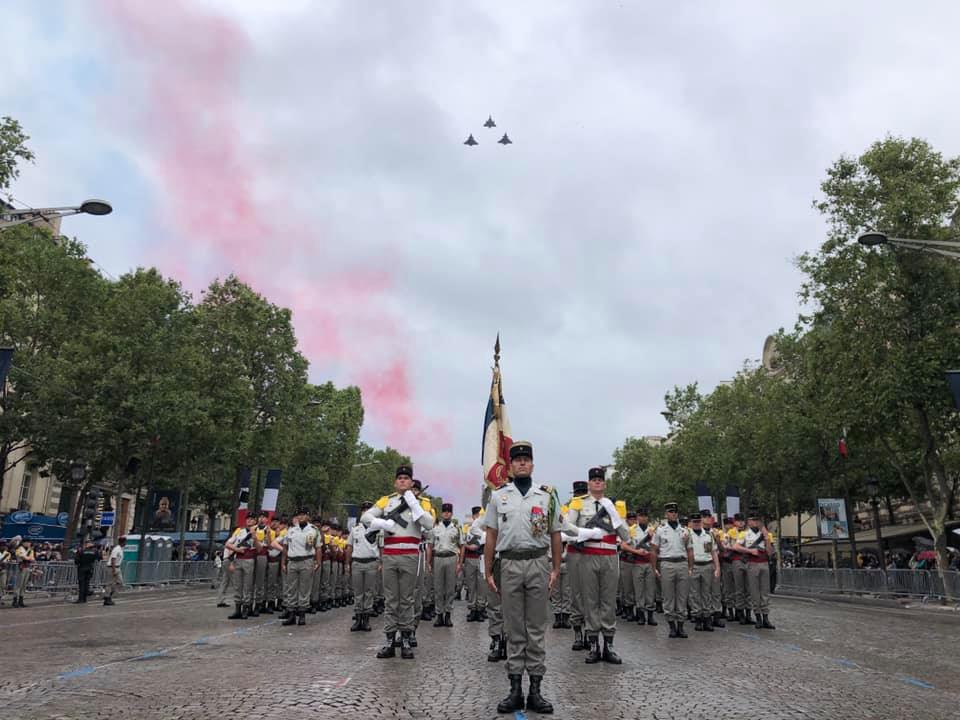 As discussed before here, today’s RMT shares the lineage of the old Senegalese colonial infantry regiment of Chad (Régiment de Tirailleurs Sénégalais du Tchad, RTST), from which a young Major Philippe Hauteclocque (under the nom de guerre, Leclerc) handpicked a column of 400 to strike out from that rare Free French colony against the key oasis of Koufra in Italian Libya in January 1941. They went on to win other honors fighting alongside the Allies at Fezzan (1942), Tunisia (1943) Alençon (1944), Paris (1944), and Strasbourg (1944). 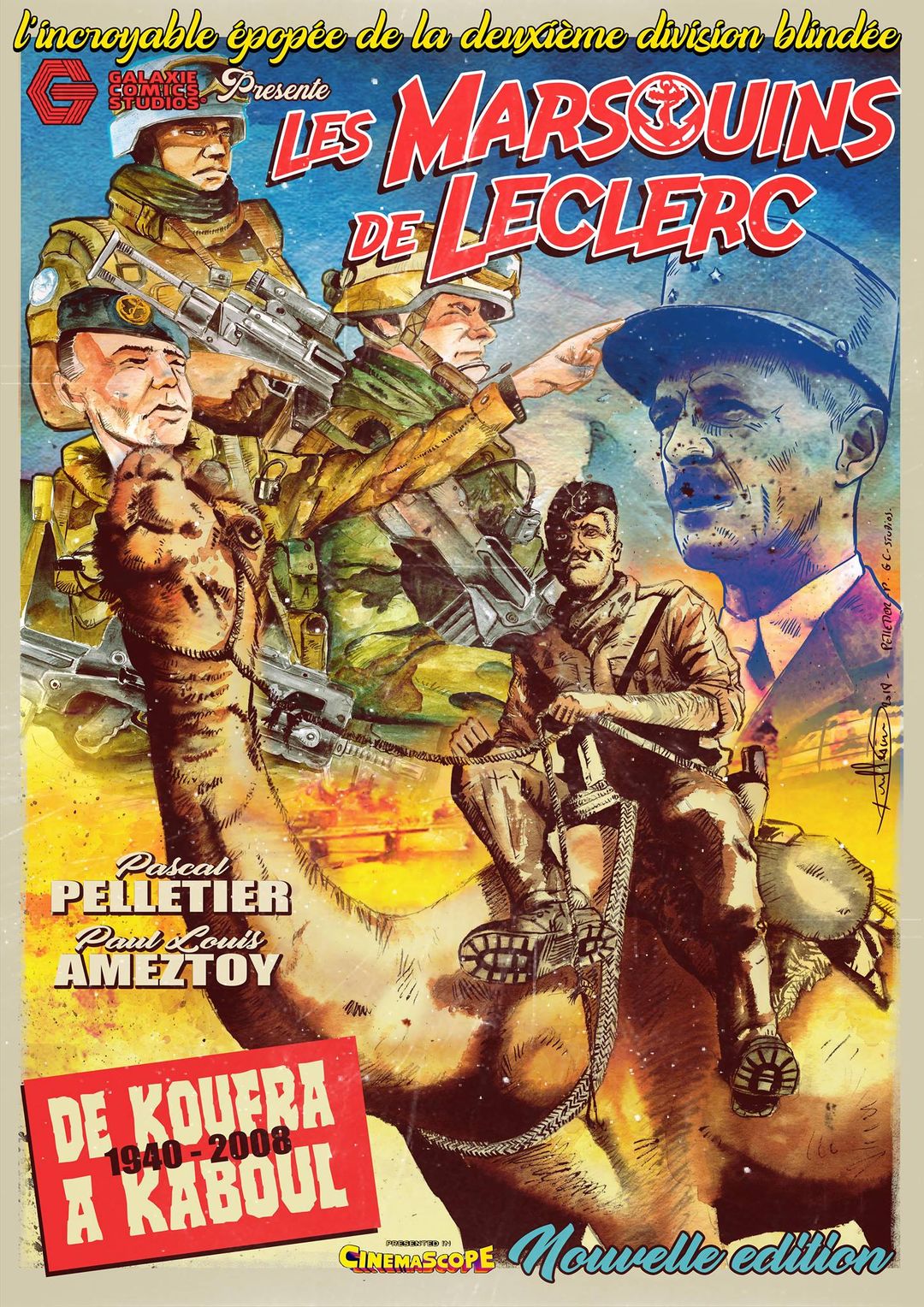 Those who are students of military history will also appreciate the irony that the RMT is carrying France’s new infantry rifle, the Heckler und Koch HK416. Seen here in rehearsals last week: 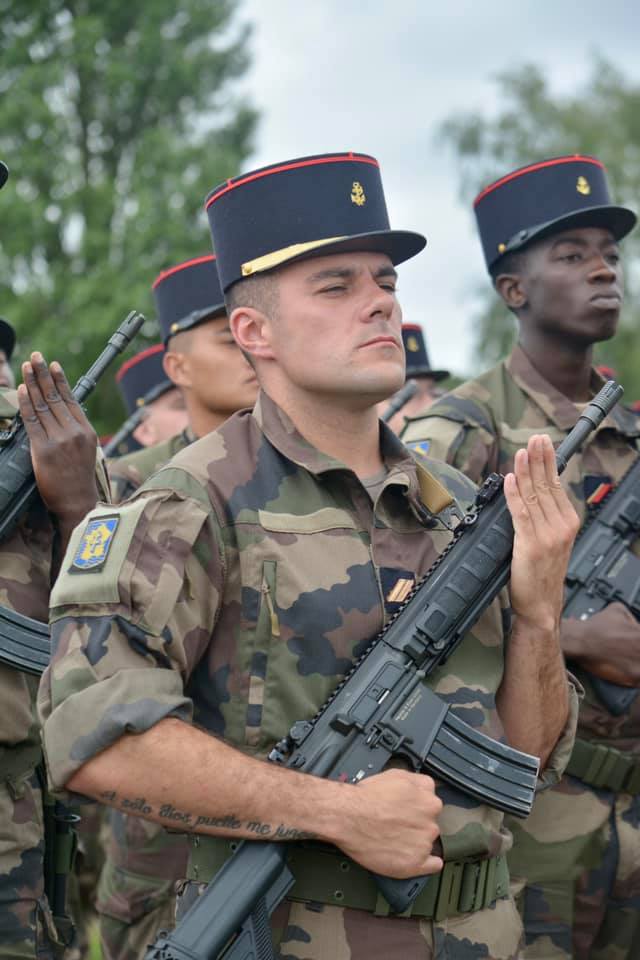 Also note they wear the fouled anchor badge of the Troupes de Marine on their kepi, although they are a mechanized infantry regiment in the French Army, another throwback to the old colonial days. Their unit patch is the old Free French Lorraine Cross.

Posted on April 27, 2021 by laststandonzombieisland 2 comments

The Chadian government last week reported that recently reelected six-time president (!) Idriss Déby, 68, died of injuries following clashes with rebels in the north of the country at the weekend. Deby’s son, leader of the Presidental Guard, has been installed as the country’s leader.

The Deby government came to power in 1990 as part of a military coup while he was head of the military. Although we aren’t in the habit of celebrating African authoritarian strongmen, it should be noted that Deby was a legend of asymmetric warfare.

He was the head of the Chadian National Armed Forces (FANT) during the Toyota Wars of the 1980s.

Trained in a series of French officer schools to include the prestigious École de Guerre, Deby’s Mad Max-style troopers pulled off a French-funded Deserts Rats-esque campaign against Gaddafi’s set-piece Libyan armored columns in Chad’s northern deserts, pitting 400 Milan- and machine gun-armed technicals against T-54s– and coming out on top. 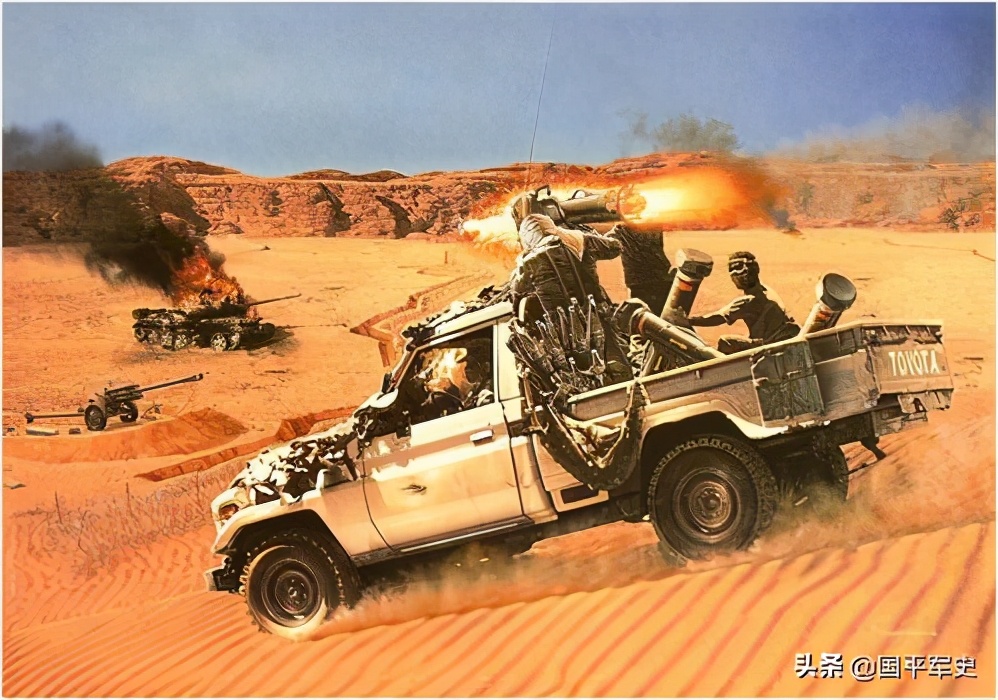 Since literally taking office 30 years ago, Deby has remained a big friend to Paris in backing up the old colonizer’s fight against Islamists on the Continent and setting up Chad as the model of stability in the region.

With that, there should be no surprise that France– who has long looked the other way on Chad’s intermittent border clashes with Nigeria– is supporting the Chadian military’s seizure of power following Deby’s death on the battlefield.

Chad and France have a unique bond that goes back to WWII.

On 26 August 1940, just two months after the fall of metropolitan France to the Axis, Chad was the first French territory in Africa to break with the Vichy government and join De Gaulle’s Free French movement.

With the blessing of colonial governor Felix Ebouse and Lt. Col Pierre Marchand, commander of the Senegalese infantry regiment of Chad (Régiment de Tirailleurs Sénégalais du Tchad, RTST), the local unit, DeGaulle sent a young Major Philippe Hauteclocque (under the nom de guerre, Leclerc) who handpicked a column of 400 to strike out from the colony against the key oasis of Koufra in Italian Libya in January 1941 to aid the British push in the Western Desert. 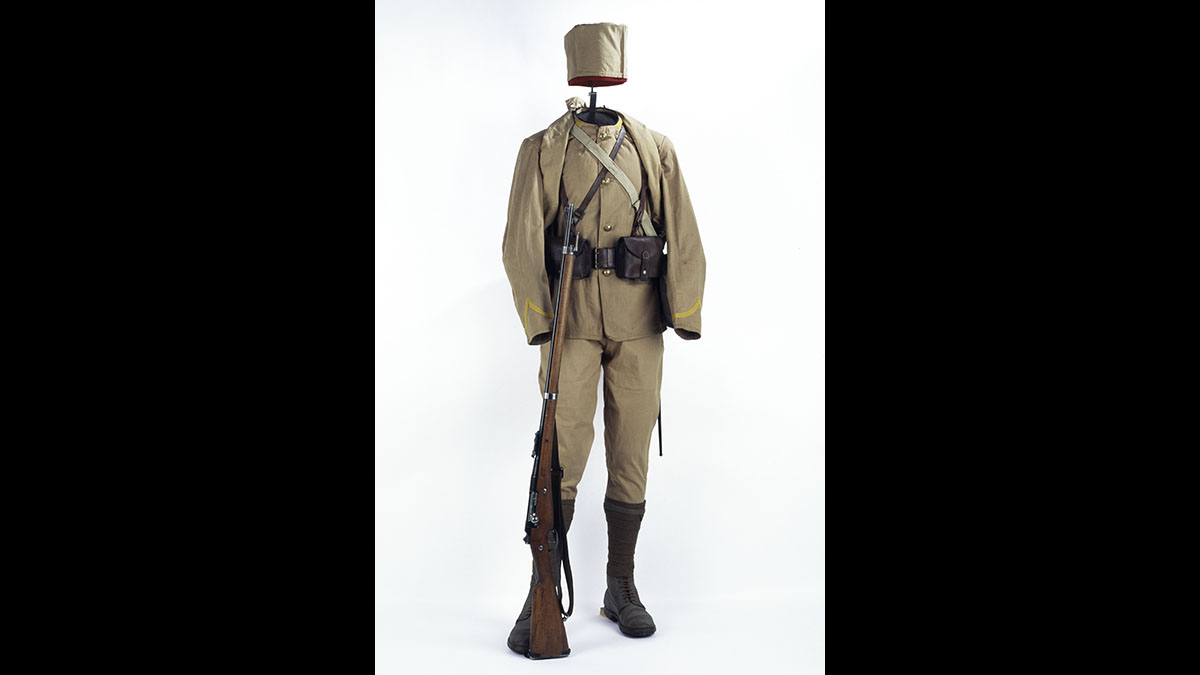 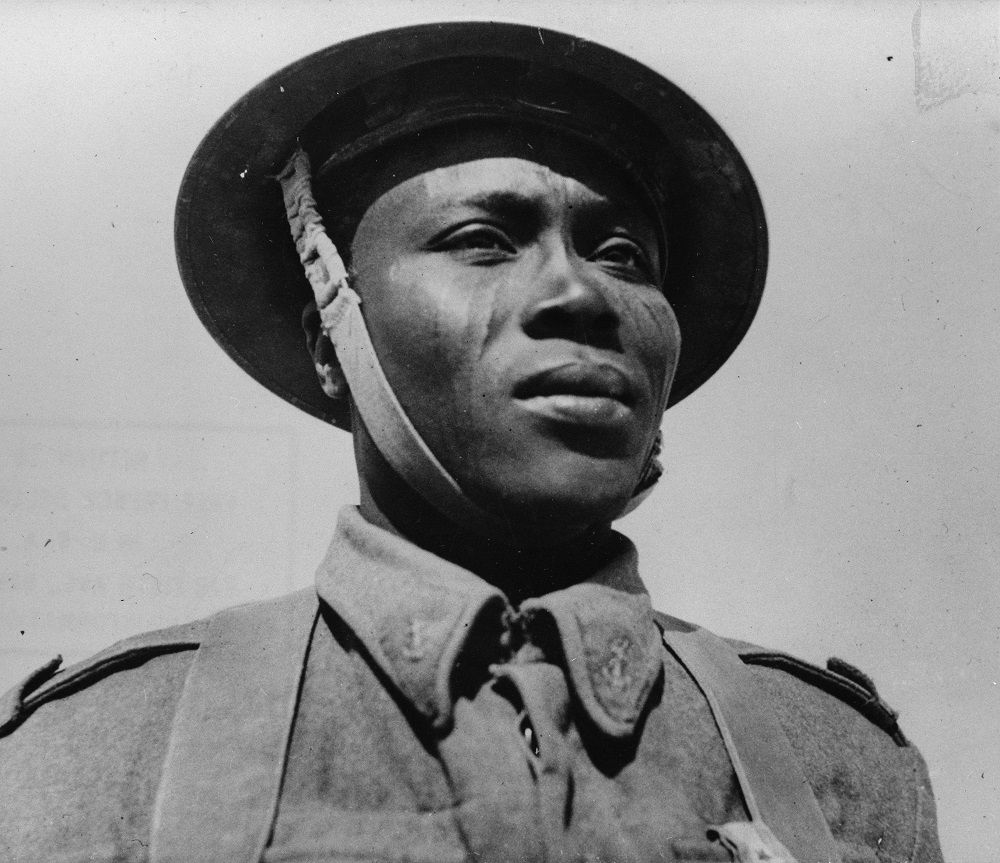 Leclerc’s truck-borne unit, augmented by some old armored cars and a couple of 75mm guns, kicked the Italian Sahariana di Cufra around the desert for two months and, upon victory, which was hugely symbolic to the Free French, Leclerc and his men (some 3/4ths were Africans from Chad), took the so-called “Koufra Oath,” promising not to lay down their arms until the Free French flag flew from the Strasbourg Cathedral.

Fast forward to 23 November 1944 and Leclerc, then general in charge of his own armored division of Sherman tanks and on his way to becoming a Marshal of France, liberated Strasbourg.

The Régiment de Marche du Tchad still exists in the modern French Army today, based in Meyenheim in Alsace, as a mechanized infantry unit of some 1,200 soldiers.

Keeping that in mind, the odds of the French ever quitting Chad are somewhat lower than zero.

Toyota Wars, the next chapter

In North Africa, self-styled “Field Marshal” Khalifa Belqasim Haftar, one of the key members of the coup against the Western-backed Senussi monarchy of King Idris that brought Gaddafi to power in 1969 and current head of the so-called Libyan National Army, is flexing his military muscle and moving troops towards Tripoli.

Propaganda footage of the column, from the LNA:

Haftar today, now a wily 76-year-old, is an old-school warlord with a curious past and is arguably the most powerful single individual in North Africa.

After graduating from the Benghazi Royal Military College and attending an advanced course at Frunze in Moscow, the young staff officer was Gaddafi’s favorite for his role in the “White Revolution” that brought the wacky dictator and his Amazons to the sit on Idris’s throne. 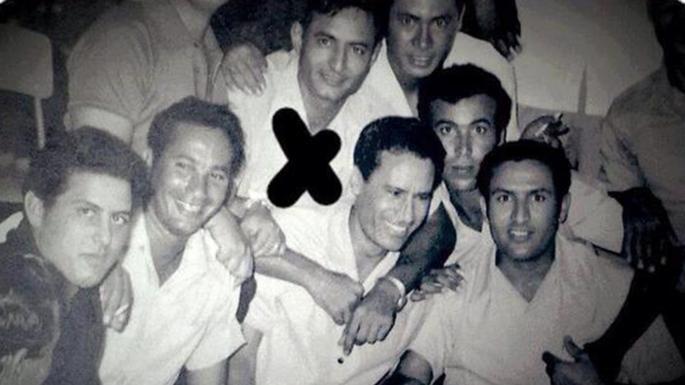 Haftar, with X, on the back of Gaddafi, back in the good ole days

By age 30, he was commanding the forces sent to help the Egyptians in the Sinai in 1973. By the late 1970s, he was Libya’s point man in the attempt to overrun French-allied Chad to the South.

However, as any historian of French colonial efforts since the 1600s will vouch, Paris does not cede influence without a bitter fight to the last colonial soldier and the nearly decade-long “Toyota War” that ensued– so named due to the fact that the Chadians were equipped with the easiest of 20th Century weapons: cheap commercial pickup trucks fitted with recoilless rifles and AAA guns. 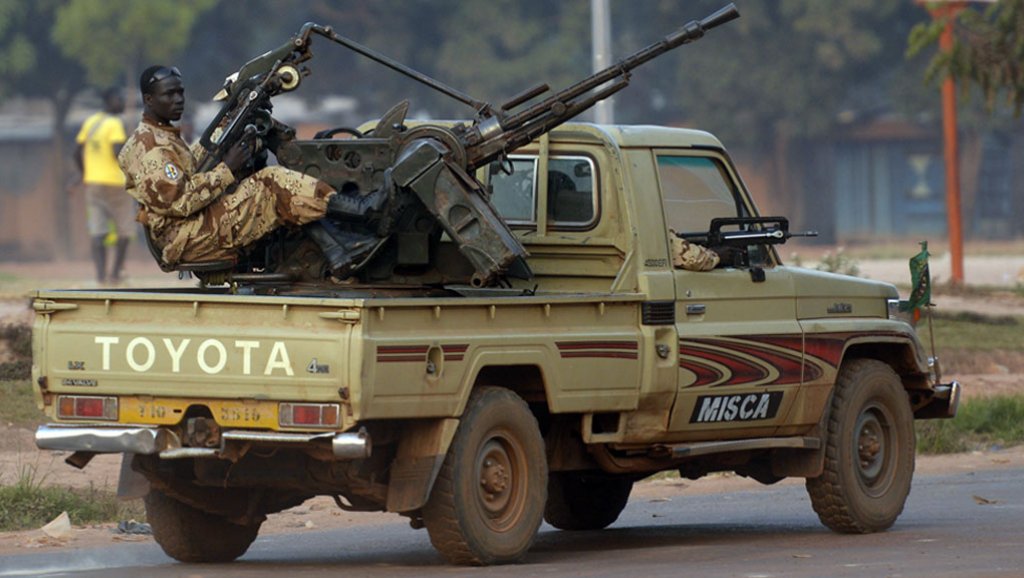 Dig the FAMAS hanging out of the passenger’s seat

In the end, with the help of some French Mirages and a few advisers/mercs/spy types that didn’t mind getting their hands dirty, the Libyans got licked good and by 1987 were driven back across the border in a rout, leaving behind shiploads of really nice Warsaw Pact tanks, APCs and accouterment. 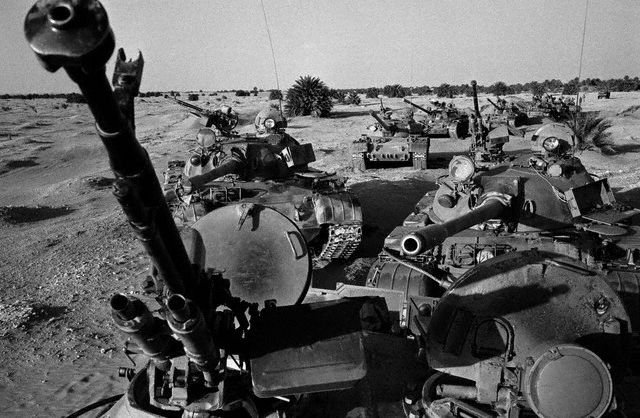 Libyan T-55 tanks stand abandoned in the desert after being captured by FANT (Forces Armees Nationales Chadiennes), the Chadian National Army, as troops reconquered the Borkou-Ennedi-Tibesti region of Chad. The Chadian Army recaptured Faya-Largeau and Wadi Doum airport, where the retreating Libyan army abandoned many dead and a great deal of military equipment, most of it of Soviet manufacture. Libyan planes made a bombing raid on the same day in an attempt to destroy material which had fallen into Chadian hands. Between April 6 and April 10, 1987, Wadi Doum, Chad

Western intel loved it as it was a treasure trove of data ripe for the taking, as much of the equipment was “never used and only dropped once” unlike the often scorched and bloody battlefield debris often captured by the Israelis from the Egyptians and Syrians.

Among the detritus of war left behind in the deserts of Northern Chad in 1987 was Col. Haftar, captured along with his entire HQ staff and a battalion’s worth of his men. 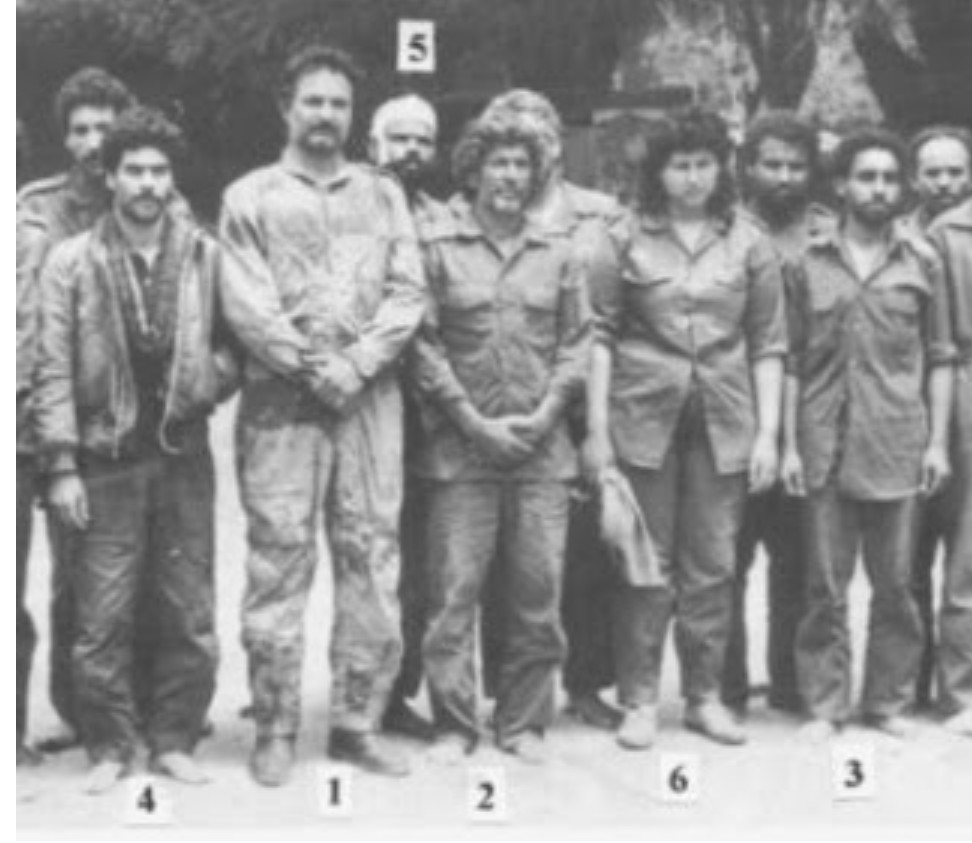 Haftar 3rd from the right, marked “2” when he was captured in Chad in 1987. He is now the owner of the most heavily armed group of Toyotas in the world.

While they were eventually repatriated, he elected to stay in the West and joined a U.S. supported opposition group, commanding a CIA-funded “brigade” in exile for almost a decade. He later slipped back into Libya in 2011 and in the morass that has been the country’s revolution and civil war, has been making a move to grab as much of the instruments of power as possible, with his LNA in bed with everyone from the Saudis and the Gulf Emirates to Moscow and Langley. The current push (or is it putsch?) is just a continuation of the book he has been working out of for 50 years.

One thing is for sure from the video of his guys moving towards Tripoli– Haftar, the proverbial cat with nine lives, learned from the Toyota Wars in spades. Most of his battle convoy looks more at home in a Mad Max movie. Hey, if it works… 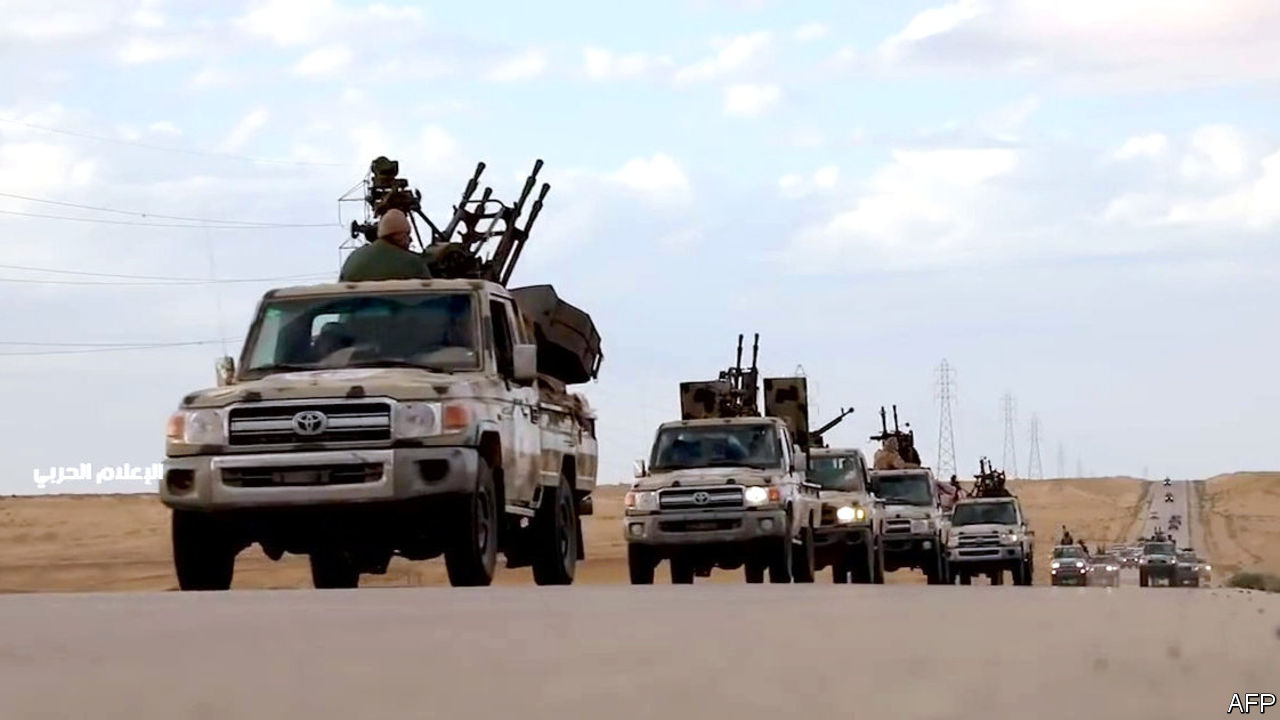 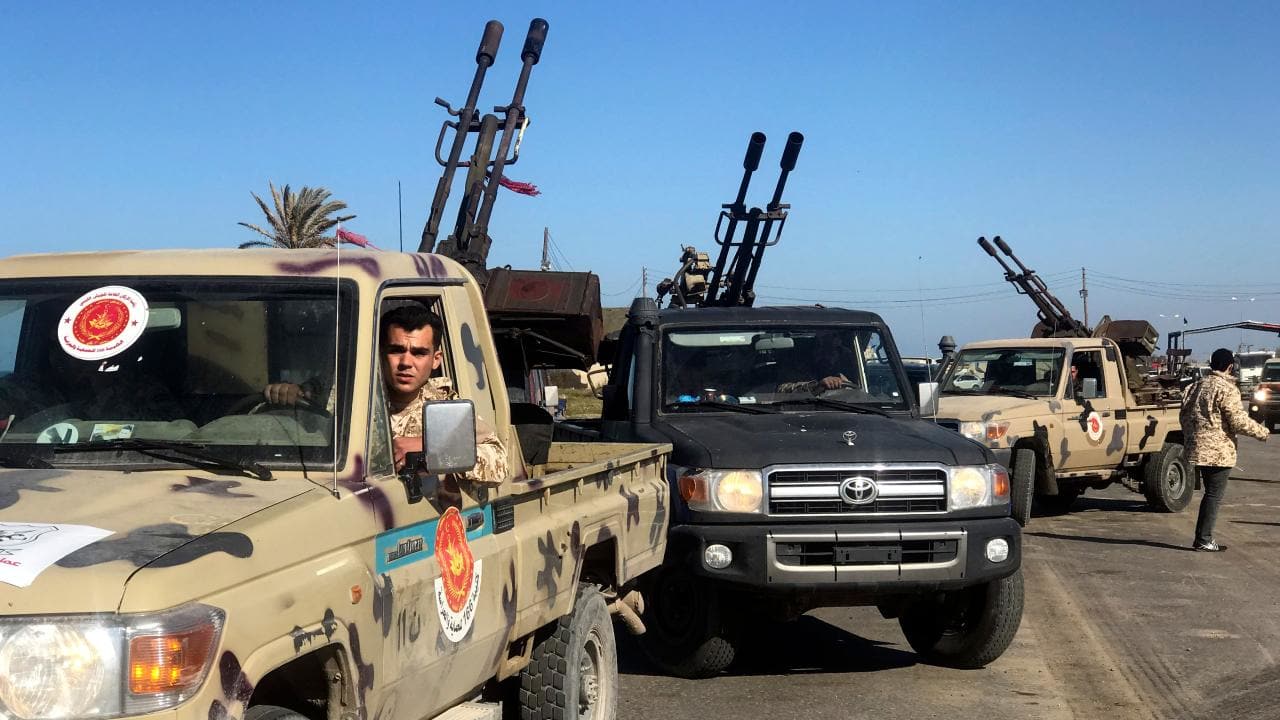 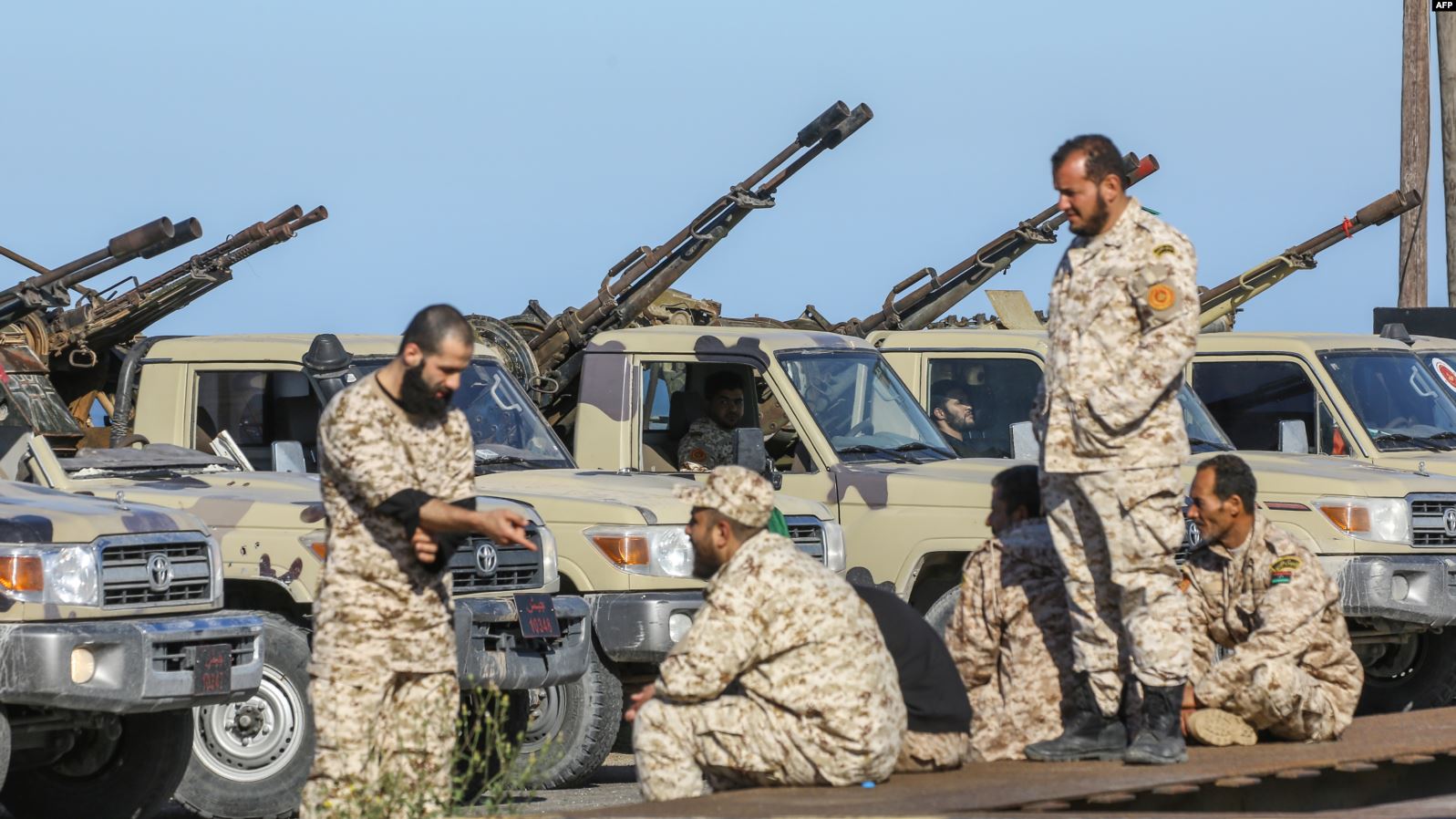 The GNA, the UN-backed government in Tripoli, are lauching their own “Volcano of Anger” counteroffensive against the LNA, and have a similar “witness me” style armada of war trucks to back them up.

A backgrounder on the current situation, from France 24, should you be curious.

Just because it was unauthorized, doesn’t make it any less awesome

In response to rough treatment by the locals along Route 19 in South Vietnam, U.S. Army Transport Corps drivers went to uparmor their vehicles to make it from Point A to Point B without having to be medevaced.

At first, this was just sandbags and M60s. Then came M2s, 1/2″ steel plate, and more handheld weapons such as M79 bloop guns. 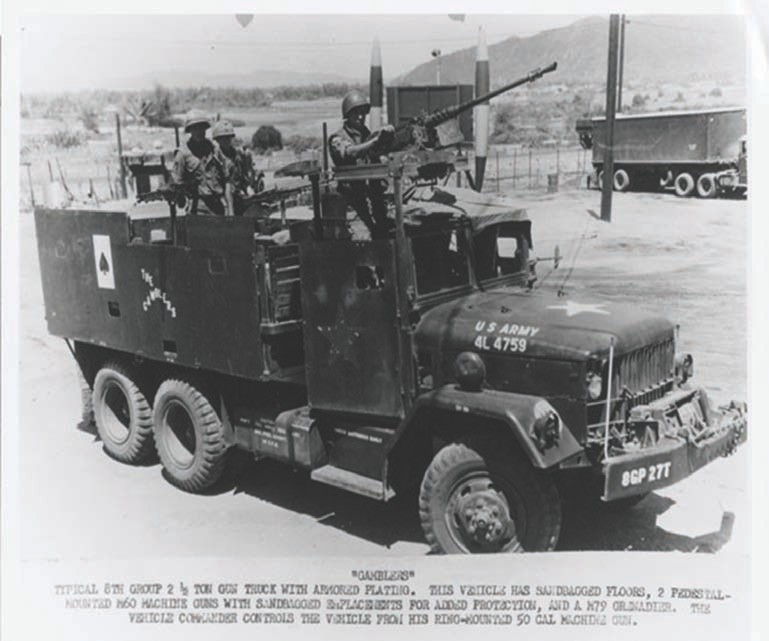 Then, needing bigger rides to carry more guns, they stepped up from 2.5-ton to 5-ton trucks with everything from surplus M113 hulls and “borrowed” M134 Mini Guns aboard. 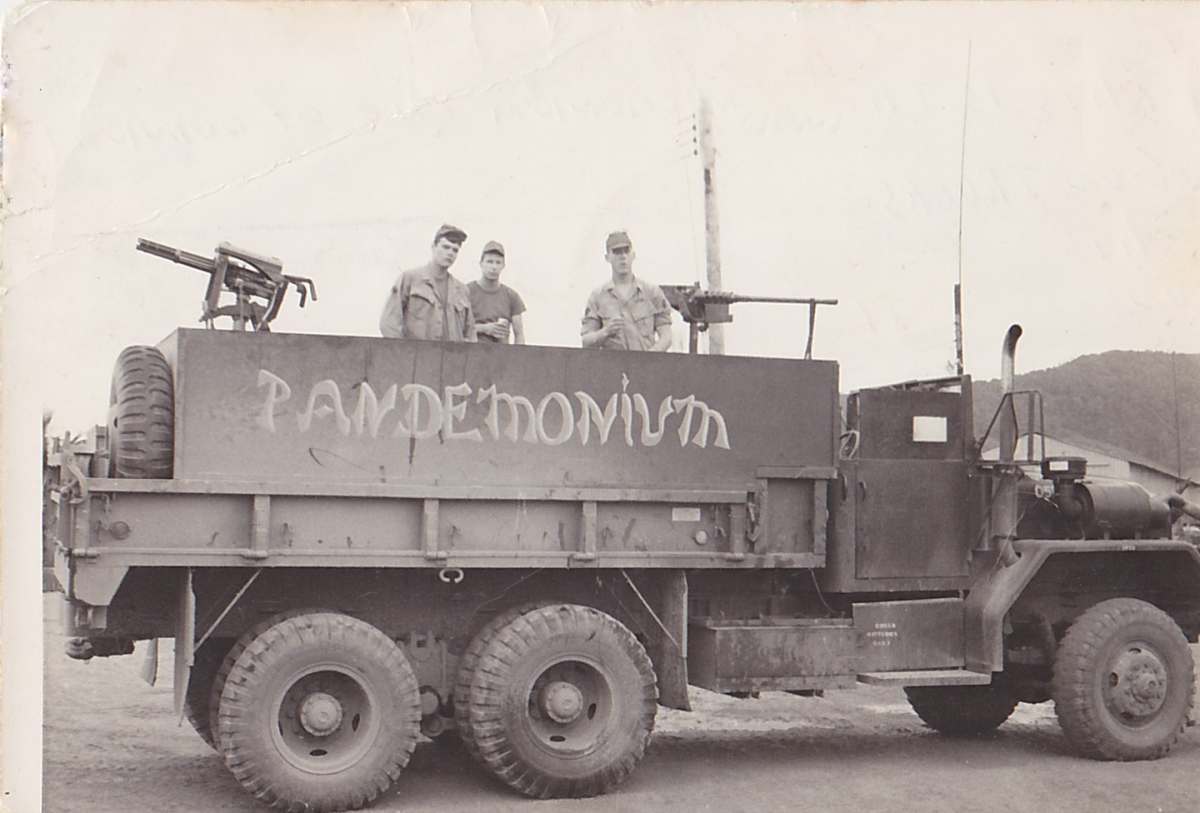 How about that M134 on the back to discourage disreputable merchants and ward off road rage at 6,000 rounds-per-minute?

More on these in my column at Guns.com

Have a surplus Soviet Bloc machinegun and no way to use it to shoot down government helicopters coming to strafe your band of freedom fighters? Well, here is a lesson in battlefield ingenuity. Yes, the Syrian rebels are at it again and CJ Chivers of the New York Times details a surplus 14.5mm heavy machine gun used on a rebel Technical (commercial pickup truck used as a combat vehicle, more on those below.) 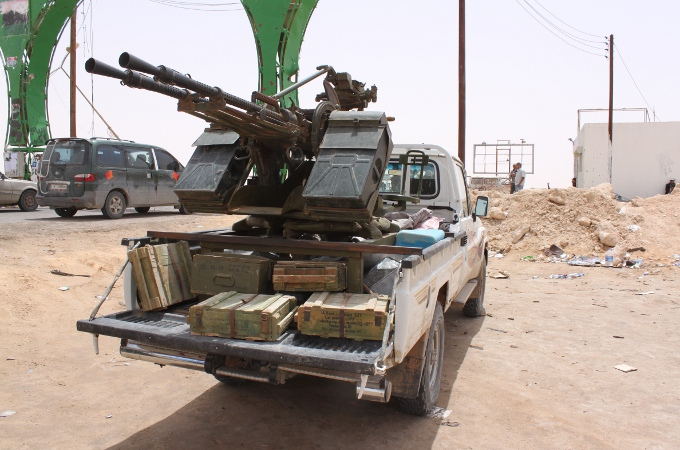