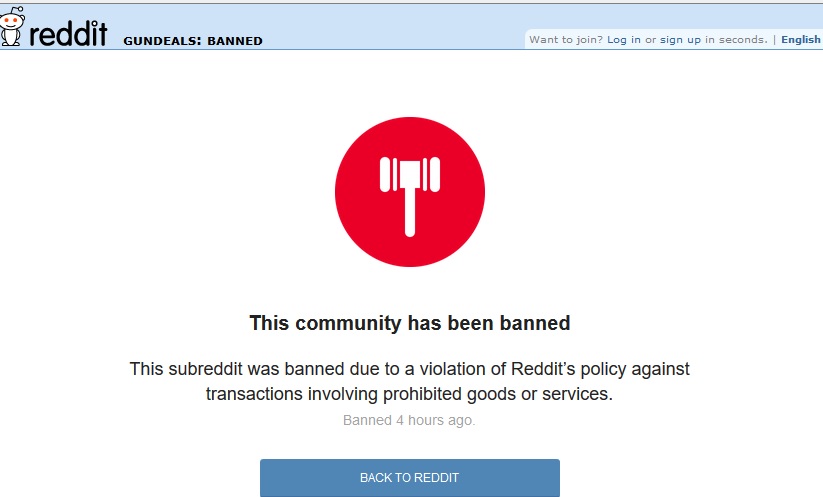 The social news discussion platform ranked among the most visited websites in the world announced a content policy Wednesday that left many popular gun boards banned.

The San Francisco-based site, which is structured around user-created boards termed “subreddits,” updated their community guidelines to bar the use of Reddit “to solicit or facilitate any transaction or gift” that involves a host of items ranging from firearms to drugs, sex work, and stolen goods.

“Reddit is not intended to be used as a marketplace and takes no responsibility for any transactions individual users might decide to undertake in spite of this,” said the company in a posting that saw nearly 3,000 comments, overwhelmingly negative to the change.

Popular subreddits trading ammunition brass, giving tips for good deals on guns for sale by shops and wholesalers and even airsoft trading boards were turned off.

More in my column over at Guns.com as well as the conversation over the looming ban hammer on gun-related content by YouTube here.

Blowback action, it uses a gas tube from a Saiga coupled with a bolt group, top cover and recoil spring from an 8mm Mauser Yugoslav M-76 rifle with a firing pin and locking piece from an HK91 modified with a Suomi bolt head and an AK-style ejector.

The fun thing is since it’s a featureless stock and the drum mag is welded to a 10-round limit, the gun is California compliant, earning it the name “Cali Commie Tommie gun.”

In all, the gun took three years to build, and once he field strips it out, the weirdness really starts to set in. Somewhere in the Khyber Pass, an assembly of artisanal gunsmiths in man dresses and pakol hats are getting ready to offer this guy a guild membership.

I talked to the guy behind it, V8 Merc, after I covered it at Guns.com and he was just flabbergasted that people dug it.

“It is humbling to see my build get well received by others out there. All I was doing when I made it was to create a unique rifle I envisioned 3 years ago,” he said.

All the suppressed subguns you need via your local machine shop

Police in Edmonton, Alberta, in conjunction with the Royal Canadian Mounted Police, found a pair of full-auto DIY MAC-11’s (out of an estimated six made) complete with matching suppressors as well as other sundry illegal arms last month. 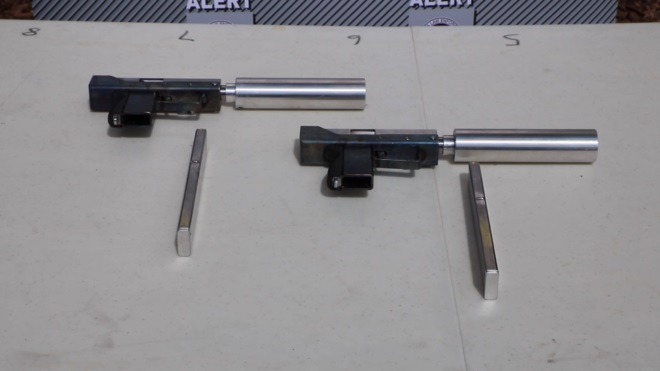 Police say that a half-dozen MACs were made, but only two were recovered. (Photos: Edmonton Police)

Made in a machinist’s shop without his knowledge, “The MAC-11s were fully automatic, with one trigger pull resulting in the entire magazine of 30 rounds being fired in just seconds,” according to a release.

They also recovered a very interesting little Beretta M71, a .22LR famed for its use by Mossad agents ‘ala Munich.

Now that’s a handy thing to have

Garage gunsmith Royal Nonesuch revisited a tiny revolver project of his and, with simple hand tools, produced a triggerless two-shot handgun in .22WMR.

The gun isn’t made for long range precision work, and it can best be described as a two-shot single action pepper box sans trigger, but the aesthetic of the brass grip kind of sets off the neat little (legal) zip gun.

But don’t expect any accuracy on a gun with no sights and a thimble-length barrel.

That’s one ka-boomish .50 cal rifle you got there

Posted on November 25, 2016 by laststandonzombieisland 2 comments

Jake Hamby, who describes himself as a “Former Combat Camera dude/Aspiring Filmmaker/Duel-Sport Enthusiast” recently ran across a whack job of a garage gun in Iraq.

The gun was apparently captured by Peshmerga forces which Hamby is working with near Bashiqa, a town in the Mosul District of northern Iraq and, if a picture says a thousand words, Hamby’s snap shots are profanity at its finest.

“Fanaticism is the mother of invention. This is a DIY .50 ‘sniper’ rifle recovered from an IS position by the Free Burma Ranger team in #bashiqa #iraq #kurdistan #banthoseguns,” noted Hamby on Instagram, going on to explain that the gun “weighed 25-30 lbs so [it’s] certainly not flimsy” 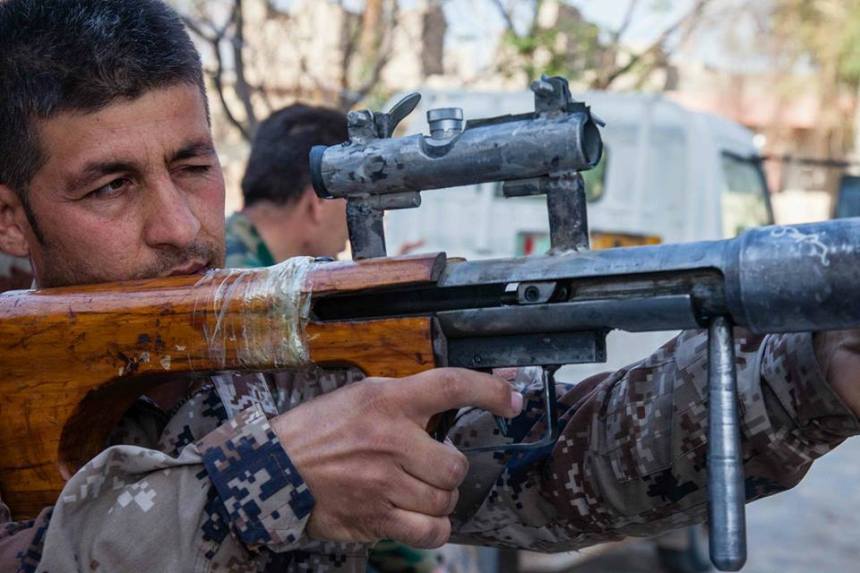 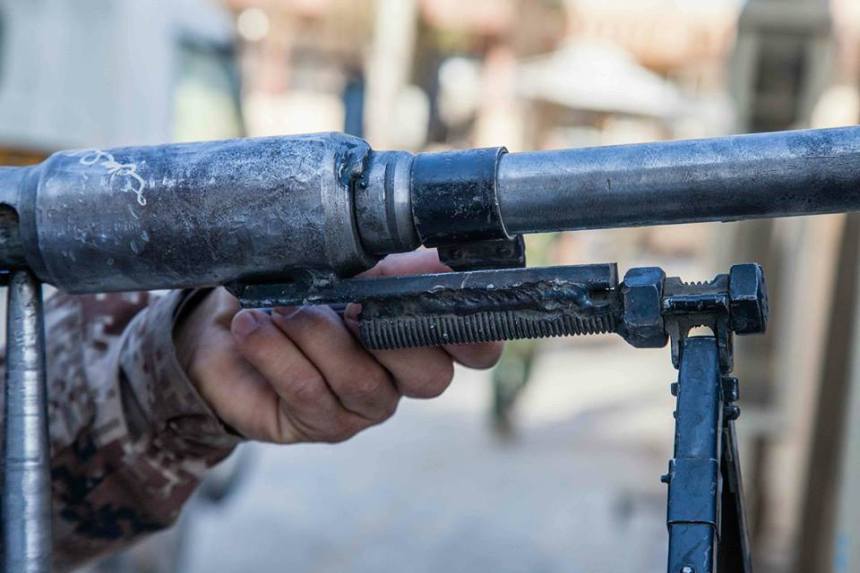 In an accompaniment to the captured 1911 from yesterday, I think this is interesting.

Ian with Forgotten Weapons takes a gander at a cottage made M1911-ish pistol that has a lot of the same features of a GI longslide, namely the long slide.

A number of these homemade garage guns were built by VC units in South Vietnam that had a hard time getting good Chicom gear shipped down the Hồ Chí Minh trail and, captured by U.S. troops, were brought back as war trophies.

The gun that Ian has, from the Gerard Ruth collection, lacks a safety (though it has a lever for one) a mag release button (though it has a rotating keeper on the bottom of the well) and is constructed with mild steel using brazing. The internals are very 1911 like–except for a lack of locking lugs on the smoothbored barrel, brazed-in breechblock and blowback action. It also has some Spanish and Soviet mechanical additions but don’t worry, they are merely ornamental in function.

Yikes is the technical term.

Sure, his trigger/muzzle control is suspect at times, but this kid, who goes by the YouTube name of RoyalNunsuch, has pretty much got a handle on a homebuild blowback action semi-auto 9mm Grease Gun remake that uses Glock 33 rounders.

She isn’t pretty, and there are some jams, but it’s only the second time the gun has been shot.

What were you building at that age? Heck I have a (semi-auto) STEN project that I have been circling back to for the past two decades and still haven’t gotten to the firing stage yet.

Those welds though. Hell, I know a hippy chick in Florida that welds better than that and she is in the business of selling empty boxes.

More backgrounder on the gun in my column at Guns.com

So in California, which has had an assault weapon ban going all the way back to 1989 and yet still have mass-shootings with California-compliant firearms, lawmakers tried to pass over 20 legislative actions on increased gun control this session.

A baker’s dozen of these made it through the legislature in Dem-heavy votes of which Gov. Jerry Brown signed 7 into law and returned five with vetoes.

Since gun rights groups and Republican lawmakers couldn’t derail these, a group of gun owners on a gun forum (Calguns) got together and decided, “Let’s try for a ballot referendum to repeal these…”

And that’s exactly what they are doing.

With a pressing deadline of Sept.29, they are trying to get 450,000 signatures on 7 different propositions. Of course, California has 13 million gun owners, which by definition should all be capable of registering to vote, so it’s not far-fetched.

I’ve spoken with the man behind the effort, a San Diego tech company executive, and it’s a hail Mary play with a lot of spunk behind it.

More over in my column at Guns.com here and here.

Authorities in the West Bank in two separate raids turned up gunsmithing tools and a small cache of 15 illegally made Swedish K type submachine gun clones.

The Times of Israel is reporting that Shin Bet, which is Israel’s equivalent of the FBI, together with troops from the Israeli Defense Forces is raids earlier this month on locations in the Palestinian cities of Yabad and Nablus, located a number of locally made burp guns with ammunition as well as the machinery to produce both.

According to the report, the guns were based off the Carl Gustav, though they appear to be updated with M4 style collapsible stocks because, hey, this is 2016.

Produced by Carl Gustav SG for the Swedish Army, in its day the M45 submachine gun was well received and considered the top of the line when it came to compact power.

It was designed during World War II, put into production in 1945 (thus the M45 designation) and labeled Kulsprutepistol. While Sweden was its primary user, several examples were acquired for use by the  U.S. government for use in Vietnam and while in American hands, this long and near-unpronounceable text simply became “the K gun.”

The OG K-gun. About the only thing the Palestinians have kept is the tubular receiver, magazine release and inner workings

Sweden cut off the supply to Washington in protest over U.S. policies in Vietnam but the K went on to be produced by Smith and Wesson as the M76 domestically. Egypt produced them as the “Port Said” subgun and they keep turning up in old weapon’s caches in the West Bank dating back to the 1950s sometimes in pretty rough shape (link in Hebrew).

With a long history of using these simple to make subguns, Palestinian gunsmiths have been cranking out their own version for years. The first locally-made Carl G popped up in 2000 and models have been found that use threaded barrels and easily replaceable automobile oil filters as suppressors.

Even with the factory closed this month, there seem to be a few still left in circulation– or the possibility that there are other workshops still in operation.

The mag on this one would appear to look larger than 9mm– though the ejection port does not. Note the AR pistol grip.

A stockless version with an abbreviated barrel similar was captured along with a vintage Beretta M1934 from two Palestinians attempting to ram an IDF checkpoint this week.

During WWII, Philippine resistance fighters found themselves with a shortage of weapons to use against Japanese occupation forces. Completely built by hand, this primitive manually-operated revolver currently in the collection of the National Firearms Museum worked in a pinch. Chambered in .38 S&W, it was built in the mountains of Mindanao using only a 12-inch rough cut file and a breast drill.