A key early contract for Herr Gaston Glock, two years before the inventor would submit his first prototype pistol for review, was for a polymer-handled field knife for an Austrian Army tender. The lightweight and rugged knife submitted by Glock won over Bundesheer purchasing agents and it was quickly adopted by the Austrian military as the FM (Feldmesser) 78.

As its name would imply, it was intended for all-purpose field use ranging from opening ammo boxes and bottles to food prep and camp chores.

And it would go on to launch an empire.

Turning a Musket into a Pike: The Arcelin 1856

The Cody Firearms Museum – Buffalo Bill Center of the West was founded in 1991 and has over 10,000 rare and interesting guns in their collection. One of the most curious they have shown off in the past couple of years for researchers is the French 1856 Arcelin system breechloading cavalry musketoon and its accompanying full-length sword bayonet, ideally for use together only when dismounted.

The world’s foremost fan of oddball French firearms, Ian McCollum, did a great video on the Arcelin last January and just slightly more current, The Armourer’s Bench this week posted a new one that goes a bit more in-depth.

The Last American Bayonet Charge at 70

Posted on February 26, 2021 by laststandonzombieisland 2 comments

This month remembers the fateful day on 7 February 1951 when the footsoldiers of Company E of the 2nd Battalion, 27th Infantry (Wolfhounds) Regiment, under the command of 30-year-old CAPT Lewis Lee Millett Sr., would undertake a successful bayonet charge on an enemy position atop frozen Hill 180 near Anyang, South Korea.

An understrength unit of just ~100 men, they fought their way up every step of what later became known as Bayonet Hill, and for good reason. 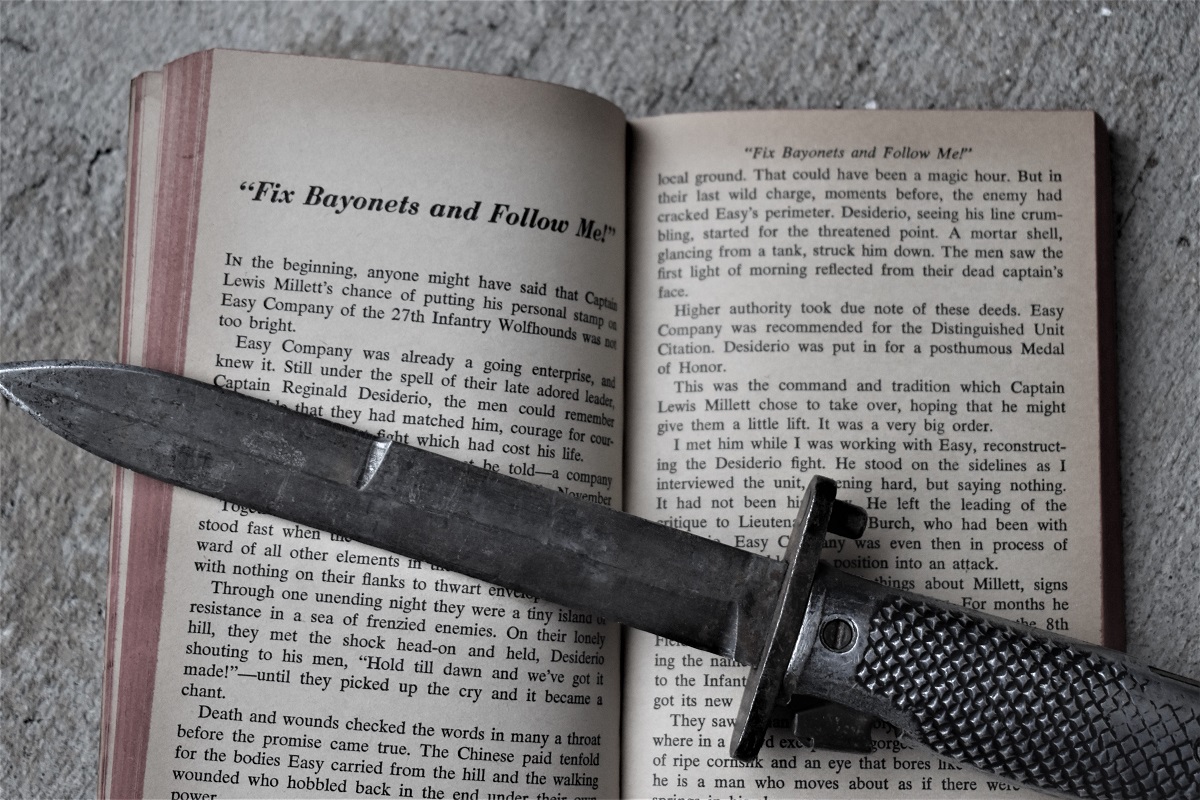 S.L.A. Marshall described the attack as “the most complete bayonet charge by American troops” since Cold Harbor in 1864.

Millett, who had received a Silver Star for driving a burning ammunition truck away from a group of soldiers before it exploded during WWII, would become a Medal of Honor recipient for his actions. He went on to found the famous Recondo school and left the military in 1973 as a colonel. He passed in 2009.

Here is Col. Millett describing his service and the action at Hill 180.

The U.S. Army in Korea remembered the event earlier this month.

For more on the Army in Korea, please visit the CMH site.

As a gun guy who also has a debilitating knife habit, of course, I am into bayonets, an addiction that I have regularly chronicled. Since my early teens, if I came across one in a swap meet, gun show, estate sale, or buddy’s collection at a decent price, it attracted my hot little hands.

If you have a similar monkey on your back, check your collection for a “WT” marked M1905E1. Produced by Wilde Tool out of Kansas City, Missouri, who made some 60,000 standard 16-inch M1905s for the U.S. M1903 Springfield rifle/M1 Garand, the “E1” mod is the later cutdown mod with the blade trimmed to 10-inches.

Apparently, they are running the same price as M1s themselves these days!

Recently snagged these plastic cards as part of a T&E I am doing on Case knives. I have a few extra on hand to pass on to fans of folding knives. Just shoot me an email with your shipping address to egerwriter@gmail.com and I will drop one in the mail (no, this is not a plot to add you to a mailing list for anyone or send your info to an eagerly awaiting Nigerian prince.)

For those of you who would rather just have the digital version, of course just click “save as” on the images. 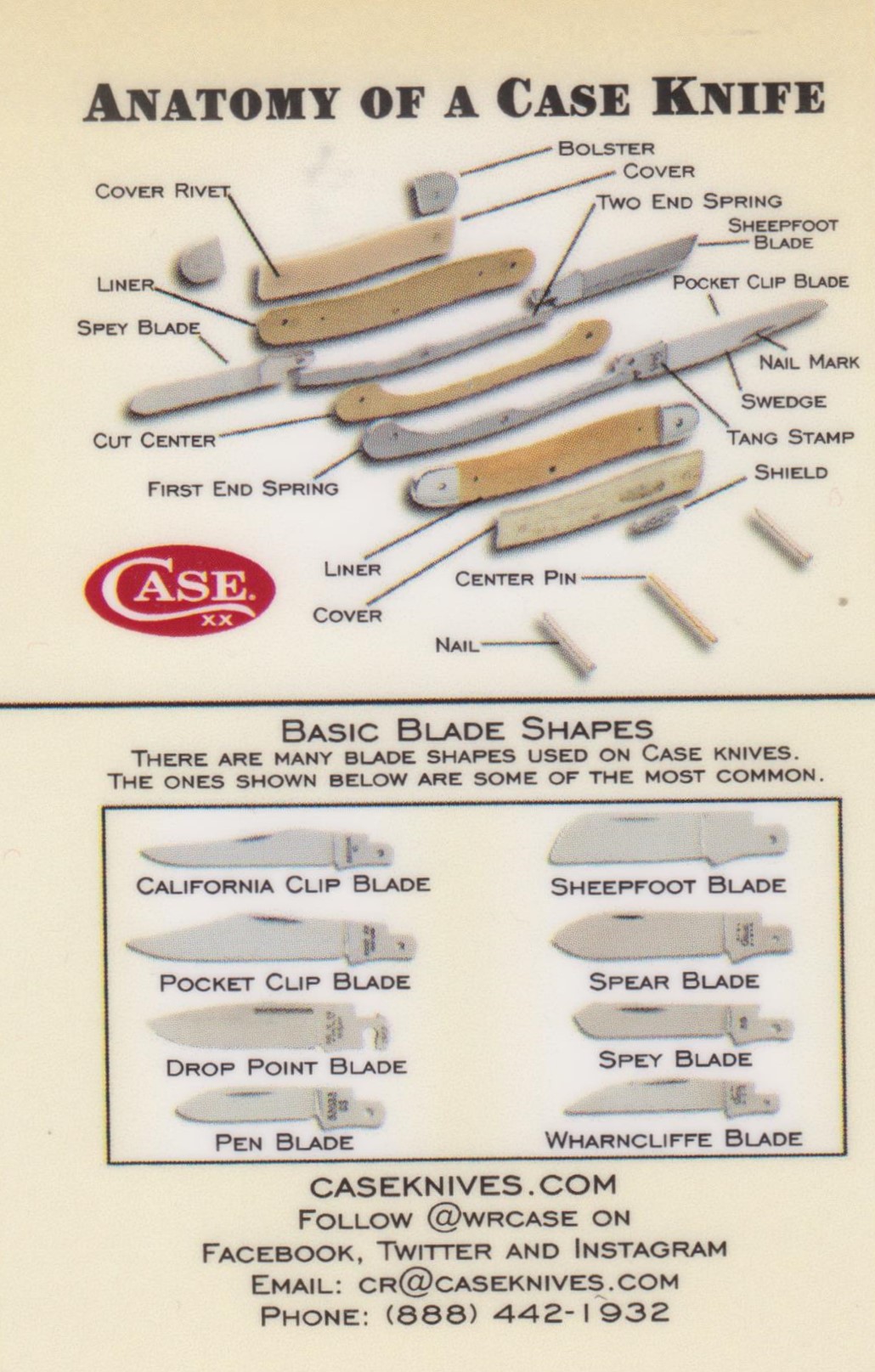 But do you have it with aluminum handles?

The Turkish military was an early and frequent user of the M1 Garand. First fielding the .30-06-caliber autoloader in 1950 as a brand-new NATO ally, it took the place of reworked 1890s-era German Mausers. 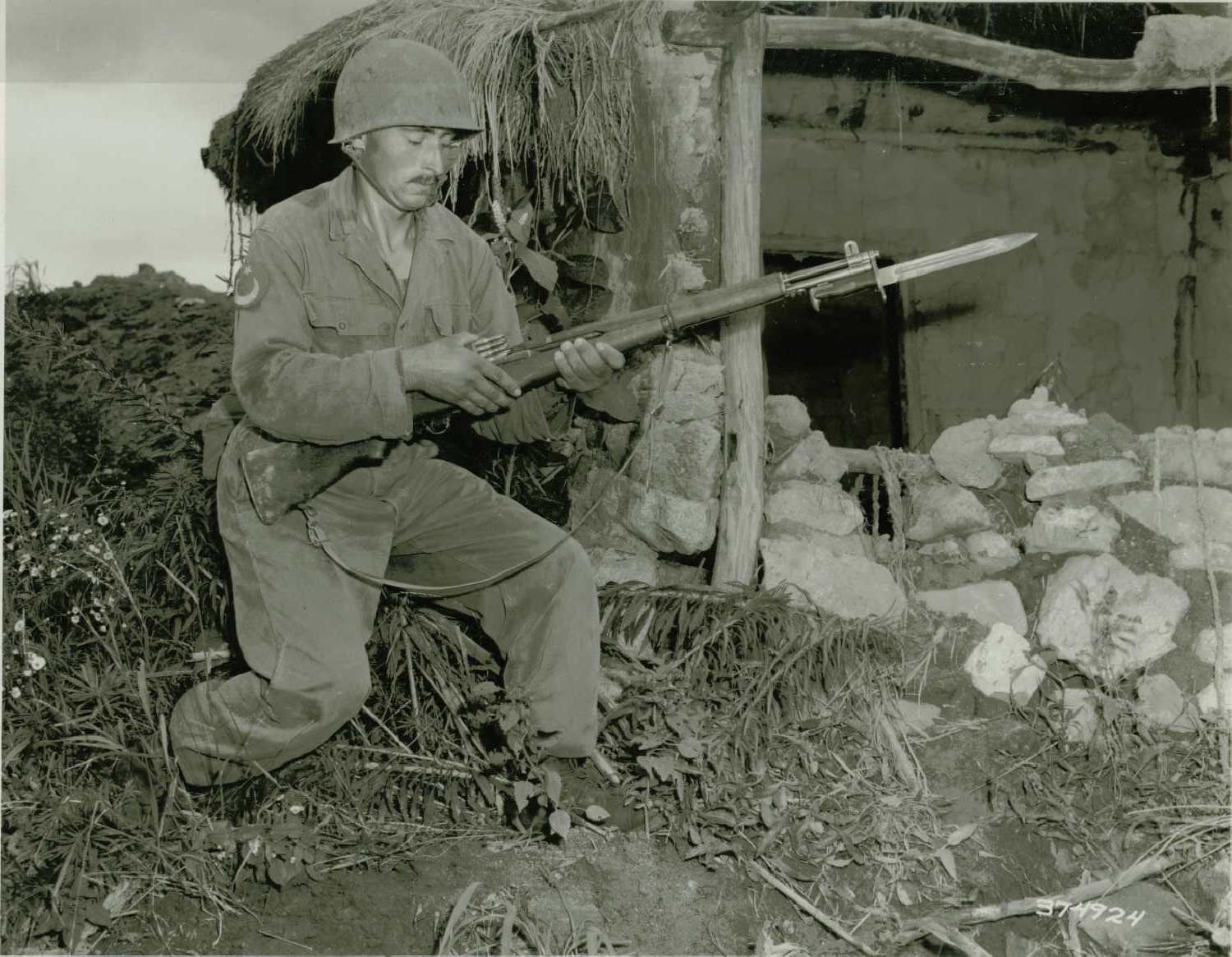 In recent years, as the Turkish military has been updating its arsenals, lots of M1s have filtered back via the CMP as ordnance returns– for instance, an estimated 13,000 former Turkish Air Force Garands came back in 2018.

However, Uncle Sam provided Istanbul with few bayonets, forcing the Turks instead to come up with their own solution. This included converting old M1935 Mauser knife bayonets in the late 1950s. We have covered these already.

As the bayonets were not included in the ordnance returns, the Turkish military has been selling them on the milsurp market where both the Mauser- and M5-type have been circulating among importers (SARCO et. al) for around $20-$30.

Note the extensive wear, with the paint almost gone and some surface rust, which is common. 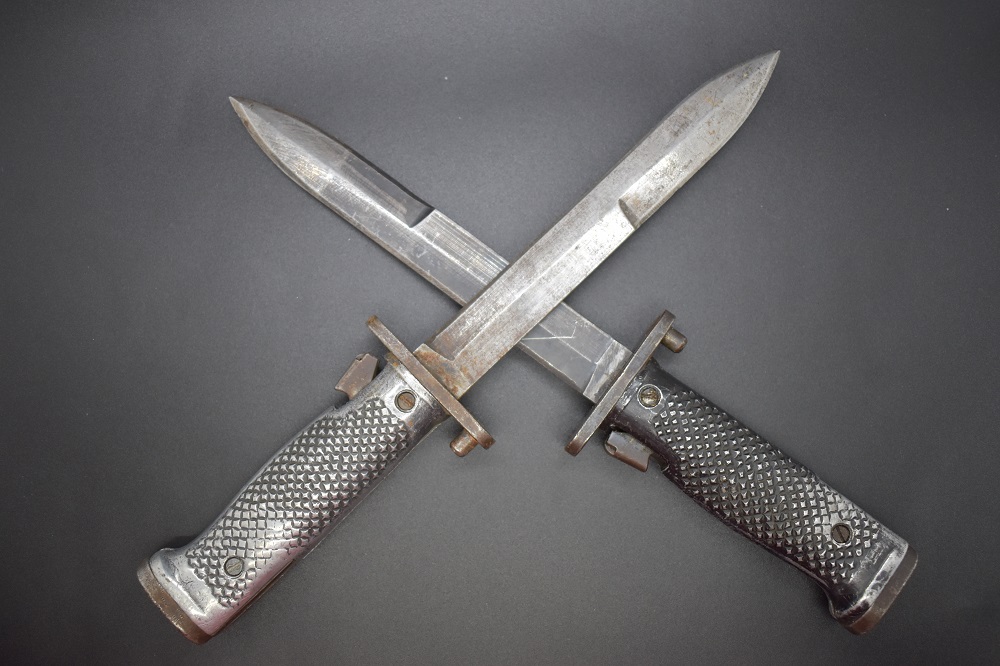 I have to say, they are pretty neat.

Matt Easton of Schola Gladiatoria has been cleaning and testing a relic Bhojpure kukri (khukuri) from the large collection of original 19th century Nepalese Government military stores that IMA and Atlanta Cutlery scored back in 2003. Of course, he is a little late to the party as I picked up one of these a few years back and found it to be just a remarkable edged weapon. Truly excellent once you got the yak grease off.

Here is Matt testing it:

Speaking of Gurkas, this year’s intake at Infantry Training Centre Catterick has gone off swimmingly.

However, with Nepal still in COVID-19 lockdown, the 2021 Intake could be delayed, which could mean some uncertainty in the manning of the Brigade of Gurkhas, the Indian Army’s seven Gorkha regiments, and the Singapore Police Force’s Gurkha Contingent.

The Ottomans liked a little flash

I’ve seen probably tens of thousands of historic edged weapons in my time, but I have to say this 18th/19th century  Turkish Yatagan probably comes closest to taking the cake when it comes to an ornate presentation sword. 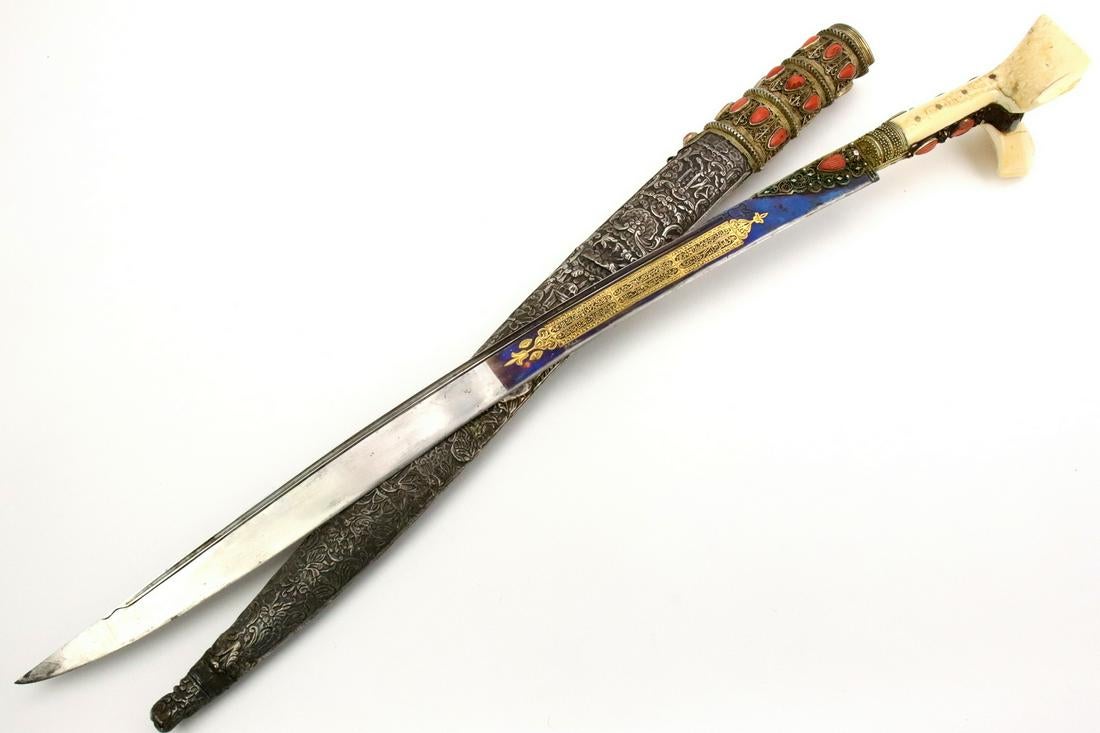 From the Sofe Auction description:

Featuring massive hilt with traditional eared grips of marine nature and seldom encountered form, gilt silver mounts with intricate filigree decorations, all set with numerous large fluted red corals to its hilt and upper scabbard. One side of the scabbard bearing an ink written number, matching to the number written on top of one of the large ears, and is most likely a Museum inventory number. Mounted with an unbelievably gorgeous large blade of traditional form but very nontraditional level of decoration, having large fire blued panels heavily inlaid with finest quality Gold Arabic scriptures, symbols and Koranic passages to both sides. In its beautiful repousse silver scabbard, depicting Islamic Temples, War Trophy panoplies, and wonderful floral scrolls.

You have to wonder how many times in this sword’s life it has been a war trophy in some soldier’s rucksack.

I’ve been tackling Kimber’s latest take on the modern M1911A1, their Rapide (Black Ice) series, in 10mm Auto. Early signs show that it delivers as advertised, at least across the first 500 rounds anyway. 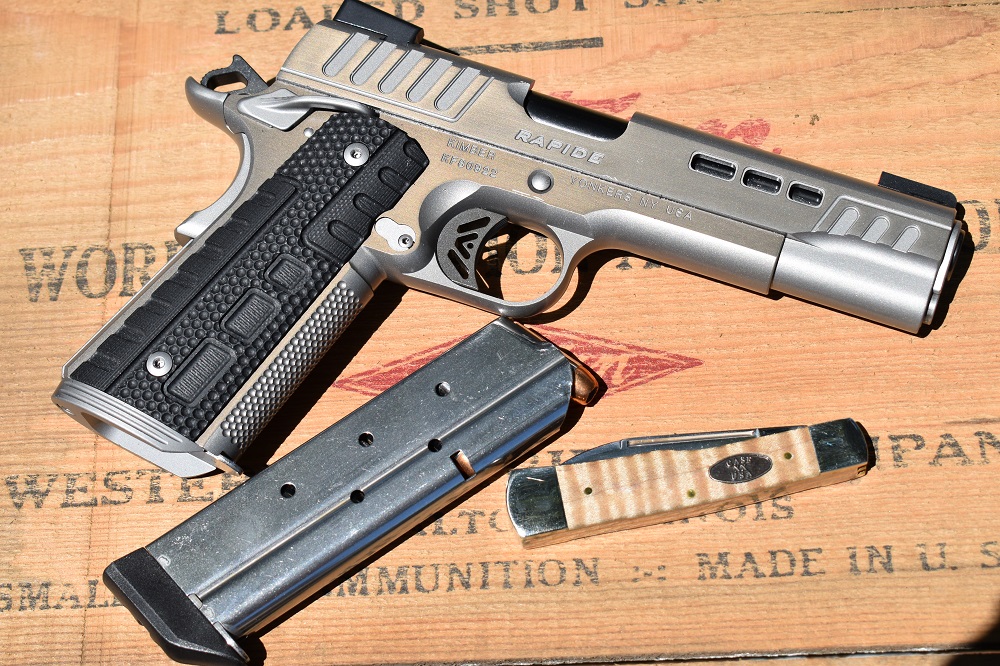 Getting a feel from some Black Ice

Since about mid-March, I have been working on a T&E on Kimber’s newest take on the M1911A1 platform– the Rapide (Black Ice). With a name familiar in Europe commonly used for a fast express train– and a popular Aston Martin model– the Rapide is billed by Kimber as a 1911 platform built for speed and is both competition and range ready.

The pistol is feature-rich including stepped cocking serrations, slide lightening cuts, a DLC coated barrel for extreme durability, extended magwell, and new V-Cut match-grade trigger. It also comes with Tru-Glo TFX Pro Day/Night sights and G10 grips. A 70-series gun with a 4.9-pound trigger pull on average, the variant I have been working with is a 10mm Auto, and I have to say, it is fetching.

The folder, btw, is a Case Gunstock in Curly Maple, which I think pairs well with the big Kimber. A blend of old and new.