The Devil’s Own, Fighting All-Comers

1 September 1943: The Tommy gun-toting “Devil’s Own” a group of salty Australians of 2/5th Infantry Bn (6 Australian Division), who helped drive the Japanese from Mount Tambu, clearing the way for the advance on Salamaua, Papua New Guinea. 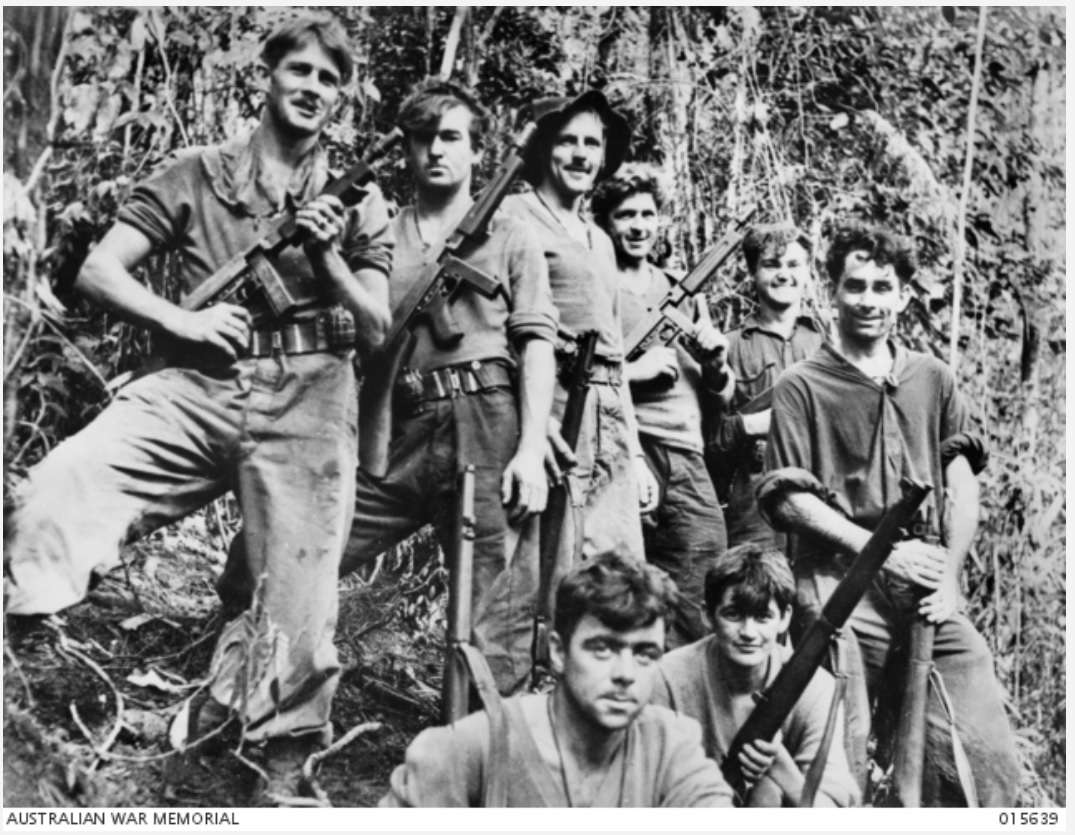 Formed in Melbourne on 18 October 1939, the Diggers of 2/5th Battalion left for the Middle East early the next year– arriving in time to fight at Bardia and Tobruk before a “vacation” in Greece and fighting the Vichy French in Syria. Shipped back home to defend Australia after the Japanese entered the war, they landed at Milne Bay, in Papua, in early October 1942 and remained engaged against the Empire until VJ Day, most of it in the triple canopied mountains along the Torricelli and Prince Alexander ranges.

Disbanded at Puckapunyal in early February 1946, 2/5 had fought the French, Germans, Italians, and Japanese– across three continents– during the course of its short existence.

Earlier this month, the Chief of Staff of the French Navy, Admiral Christophe Prazuck announced the that the names of the nine French Marine units, the Fusiliers Marins et Commandos Marins, will moving forward be tied to historic officers of the names of key heroes from the Free French 1er BFM/BFMC (aka Commando Kieffer) and 1er RFM (Régiment de Fusiliers Marins).

Taking part in the Dieppe Raid in August 1942, they landed in force at D-Day and continued on to the Alps, earning more than 200 Croix de Guerre and 32 Légion d’Honneur.

While elite frogmen units such as Commando Hubert have the names of famous (posthumously) officers who have led them, up until this month, the modern French marines had unit names such as the uninspired but descriptive details such as the Groupe des Marines de l’Atlantique (Atlantic Marines Group). Now, the Groupe des Marines de l’Atlantique, for example, is the Amyot d’Inville Marines Battalion, named after French navy CDR Amyot D’Inville who commanded the Free French Marines at Bir Hakeim and was killed on the Continent in 1944.

With this month being the 70th anniversary of the rush by the Free World to help keep the fledgling Republic of Korea from forced incorporation by its Communist neighbor to the North, it should be pointed out that the UN forces that mustered to liberate Seoul and keep it so carried an interesting array of arms. Gathered ultimately from 21 countries you had a lot of WWII-era repeats such as No. 3 and No. 4 Enfields carried by Commonwealth troops as well as M1 Garands/Carbines toted by American and a host of Uncle Sam-supplied countries.

But there were most assuredly some oddball infantry weapons that were used as well.

One historical curiosity was the initial contingent supplied by the Royal Thai Army, who left for Korea in October 1950 wearing French Adrian-style “sun” helmets and armed with 8x52mm Type 66 Siamese Mausers that were actually versions of the bolt-action Japanese Type 38 Arisaka built before WWII at Japan’s Koishikawa arsenal. 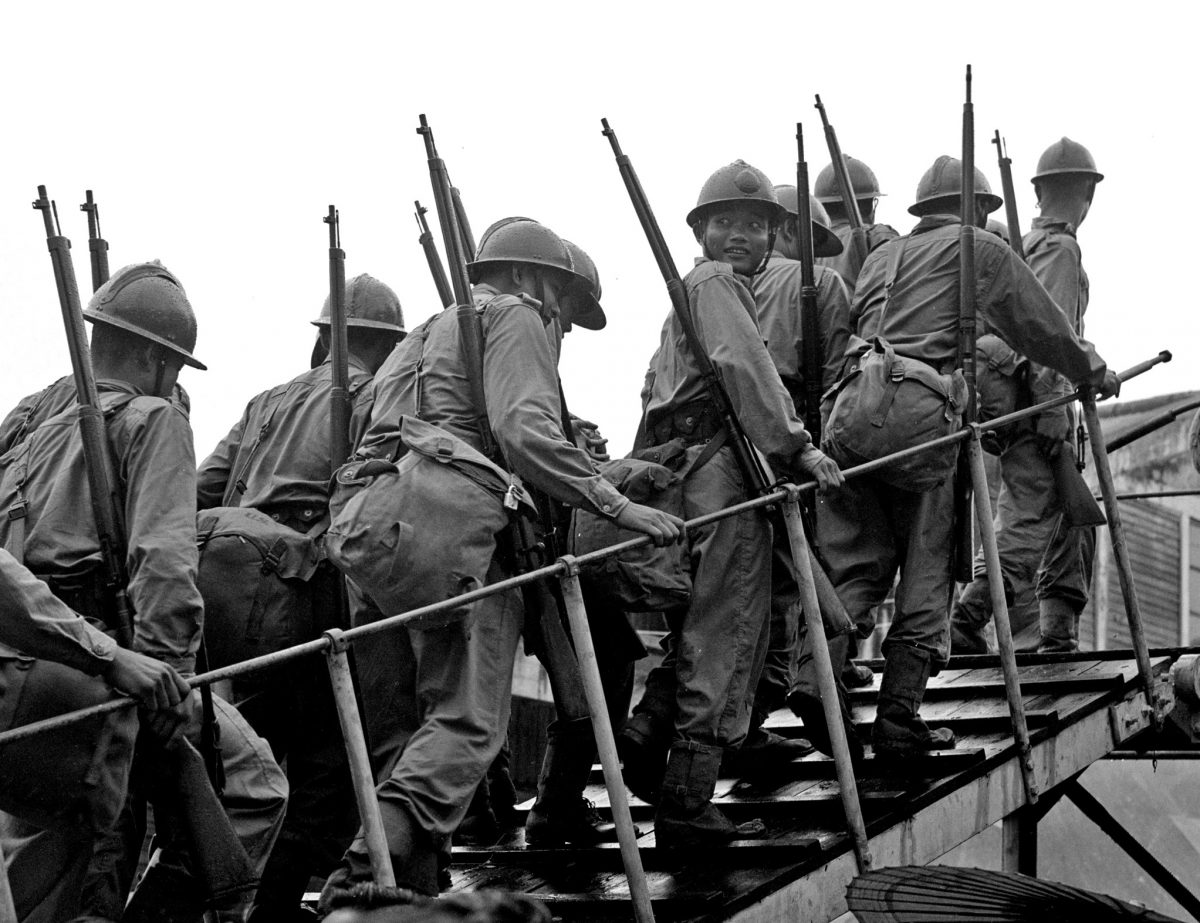 Posted on June 5, 2020 by laststandonzombieisland 3 comments 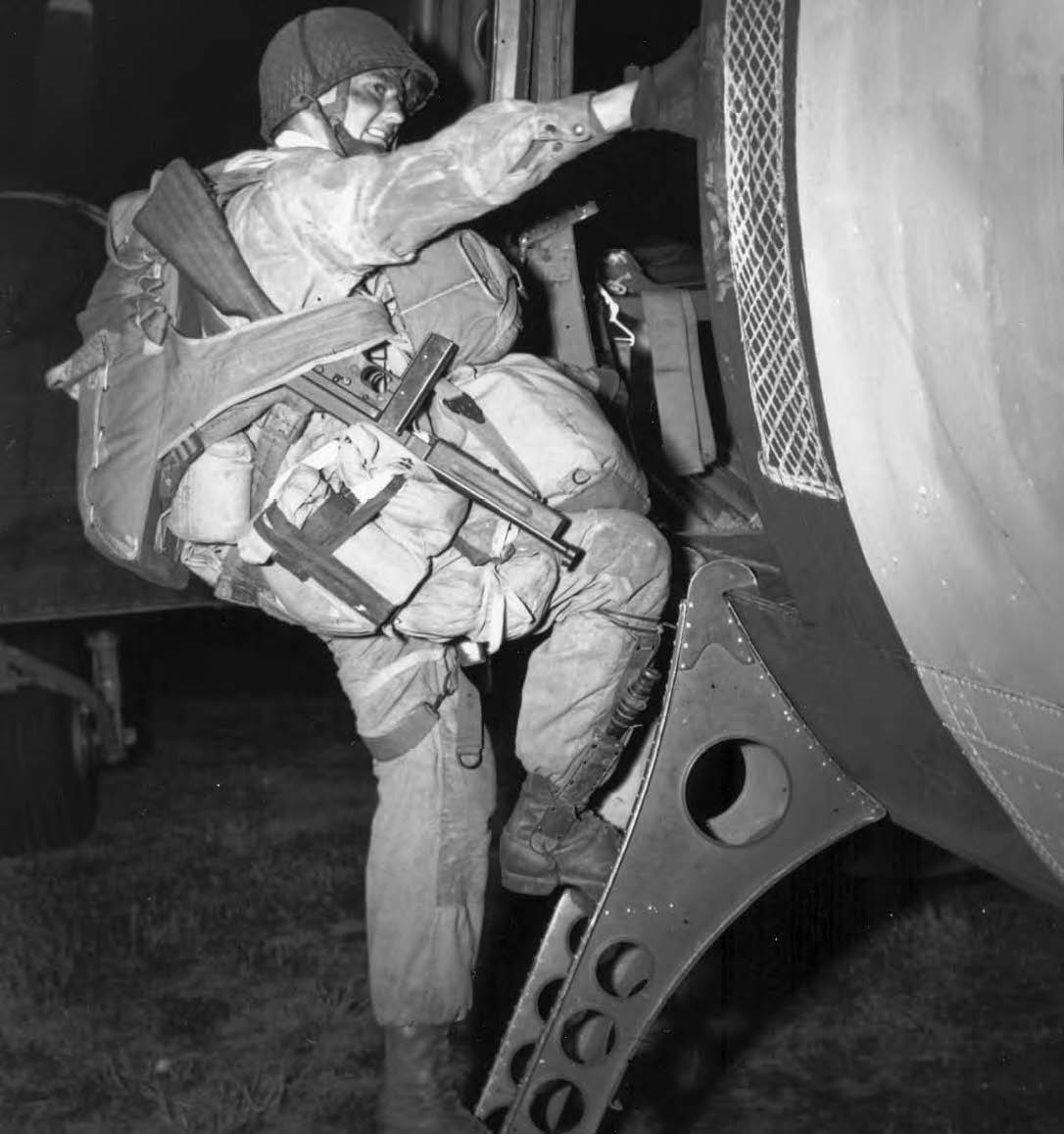 Note Gorenc’s strapped down M1 Thompson SMG and fighting knife on his boot. Notably, he chose not to use a Griswold jump bag for his Tommy Gun, preferring to have it available immediately when landing (U.S. Army Signal Corps Photo)

“Sgt. Joseph F. Gorenc from Sheboygan, Wisconsin, the assistant S3 of HQ/3, 506th PIR, 101st Airborne Division climbing aboard the lead transport aircraft C-47 Dakota 8Y-S “Stoy Hora” of the 440th Troop Carrier Group at RAF Exeter Airfield, Devon, the UK on the night of 5/6th June 1944 for a drop behind Utah Beach on the Cotentin Peninsula of France near Cherbourg.

Sgt. Gorenc was taken prisoner on June 8th at St. Côme-du-Mont and reported as MIA. He apparently escaped from a Prison train in July and he was in action again at ‘Operation Market Garden’.

He returned home after the war, married, and had two daughters and at the age of 34 was an officer in a new startup manufacturing firm. While he, the owner, and another man were working late in the shop one night, an oil tank exploded. The young man; Joe and the owner were all injured but Joe’s injuries were life-threatening and he died two weeks later. (Taken from an account given by his sister Pat)”

Tommy guns and Fusiliers, 73 years on

The Naval Commandos were formed by Free French troops in exile in the U.K. and were modeled after the British Commandos, who were founded in 1940. They were formed mainly from Free French Navy Fusiliers-Marins (naval infantry) as well as a smattering of other Free French volunteers and trained at the Commando Basic Training Centre Achnacarry, Scotland.

Besides fighting in France, the 1st BFMC saw service in Holland where they ended the war. Immediatly after VE Day, the unit split, with the bulk heading to Indochina where the French remained very busy for another decade, and a cadre set up the Commando Training School, Siroco Center, Matifou Cape, in Algeria in 1946.

By 1947, the CM were set up in seven units, each named for a fallen WWII commando, and endure today.

One member who landed on D-Day remained standing tall as late as 2014:

From the 1920s through the 1960s, many civilian police forces, such as these cops in Tacoma, Wash, had a few Tommy guns on the racks “just in case” phasing them out after Vietnam with 1033 Program M16A1s

The St. Louis Metro Police Department is parting with most of its huge and historic Thompson submachine gun collection in a move to get a good deal on new duty guns.

Twenty-seven of the city’s 30 Tommy guns will be sold to Midwest Distributors for $22,000 apiece. All told, the Kentucky-based firm will pay $618,500 for the transferrable .45 ACP s sub guns and some other surplus weapons. This is on top of $597,000 paid by Minneapolis-based Bill Hicks & Co. for 1,748 used Beretta handguns currently carried by the department.

The money will go to offset the cost of new Berettas at $450 a pop to equip every officer with as well as a quantity of AR-15s to be used as patrol rifles.

Looking for a deal on a Tommy gun? 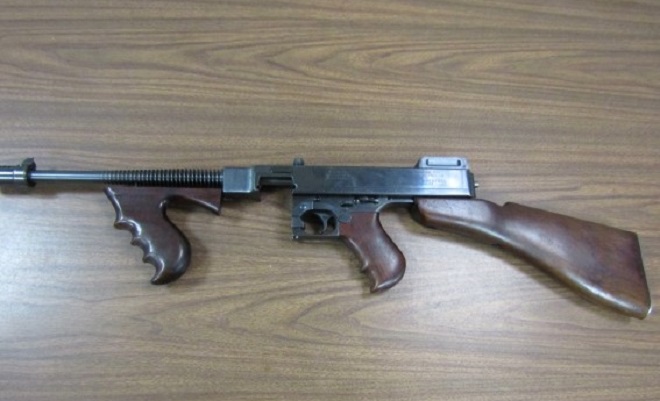 That stock comes off, you know?

Plymouth Borough, outside of Wilkes-Barre, Pennsylvania, isn’t big, but they have had a vintage and transferrable Tommy gun in their city’s arsenal since Prohibition that they want to get rid of if the price is right.

Often thought of by militaria collectors as the holy grail of U.S. sub guns, the overstamp came about when Auto Ordnance moved to offload their stock of Colt-made M1921 Thompsons and, modifying them slightly by reducing their cyclic rate of fire from 800 rounds per minute to a more pedestrian 600, over-stamped the “1” in 1921 with an “8.”

The Title II/Class 3 weapon is listed on Gunbroker, with a current price of $28,000 and two days to go before the bidding ends.

In recent years several agencies have liquidated their stocks of aging Tommy guns including St.Louis PD who put a cool $1 million worth of the .45 ACP SMGs up for sale in 2014 and another North Carolina department who moved to swap a pair of Thompsons for 88 newer semi-auto Bushmasters.

In 2015, the town of Kinston, North Carolina, who had picked up an overstamp to ward off possible tobacco payroll robbers in 1935, sold their gun for $36,750, which is about average for the model.

I don’t always hunt monsters; but when I do, I do it underwater with a submachine gun 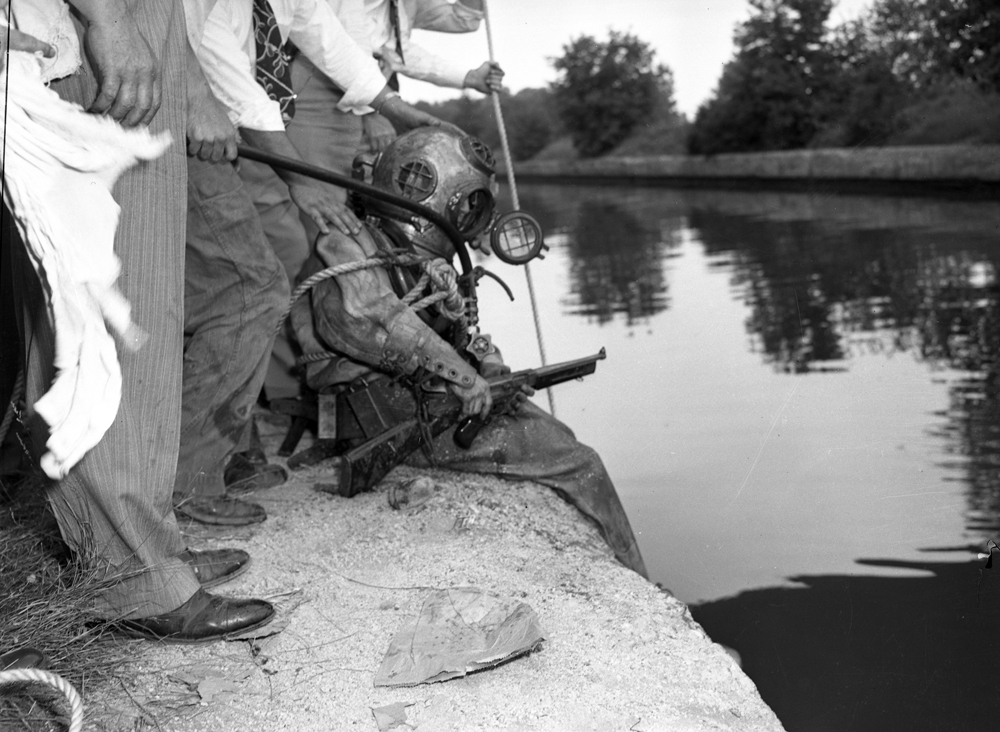 From the archives of the Chicago Tribune: A diver recovers a Thompson submachine gun from the Calumet-Saganashkee Channel in a photo that ran in the paper on Saturday, Aug. 6, 1949. The story that accompanied the photo reported the investigation of a holdup that led to the deaths of two guards in the course of a bank robbery. “Two revolvers taken from the slain guards had been recovered with magnets from the same spot Thursday,” the paper reported, “together with cartridges and two machine gun clips.” Three of the robbers were nabbed after a fourth named names; one of these identified the machine gun as the one used in the course of the crime.

Looks like a nice M1A1 GI Thompson from WWII of course, rather than a shotgun.

This image reminds me of Papa Hemingway and his predilection to hunt sharks (and U-boats) with his own Colt 1921 Tommy Gun.